Review: A Seat at the Table 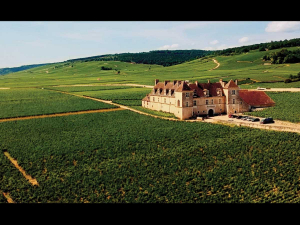 Clos Henri in Marlborough, owned by an open minded French winemaking family from Sancerre in the Loire Valley.

If A Seat at the Table hasn’t made it onto your must-see movie radar yet, it will.

The film about New Zealand’s rise from zero to hero on the global wine stage was released in August at the 2019 NZ International Film Festival.

It’s a self-funded venture from co director-producers David Nash and Simon Mark-Brown; a pair with an eye for a great landscape and a nose for a good story. Both come to life on the big screen in the drop dead gorgeous places, wineries and landscapes in New Zealand and France, which were filmed over five years. The cinematography is outstanding, as is to be expected from Nash, whose background is in advertising commercials.

The main premise of the film is that French wine is the greatest in the world. It’s the pinnacle to which all wine lovers aspire and, by proxy, the film’s core message suggests that New Zealand winemakers also aspire to make wines that are on a par with the best from France.

This message makes sense, mostly. But holding France up as the be-all-and-end-all of the wine world made my heckles raise slightly.

The film takes a solid French view from start to finish, backing up its assertion effectively but perhaps neglecting to acknowledge that other countries also make a wide range of outstanding wines from their own indigenous grapes.

A Seat at the Table begins with Stephen Browett, chairman of Farr Vintners in London, saying his customers know white Burgundy is the greatest white wine in the world but that there are wines from other places that are giving it a good run for its money, notably, Kumeu River Chardonnays. So, in 2015, he organised a blind one off tasting at Farr Vintners HQ in London, which was attended by wine writer Jancis Robinson MW and other highly respected wine professionals. The aim was to see how well Burgundy and Kumeu River Chardonnays did side by side, with their identities concealed.

Kumeu River came first in every flight. Which leads us to the question posed by the film: does New Zealand deserve a seat at the international wine table, due to successes such as this?

It could be argued that we are already there. Our country’s wines command an extremely high average price per litre in one of their biggest exports markets, the United Kingdom, and Marlborough is now the world’s HQ of fresh ‘n fruity Sauvignon Blanc.

An impressive cast of movers and shakers are interviewed in the film. These include elder statesmen such as Sir George Fistonich and Master of Wine Bob Campbell, as well as a huge number of Kiwi winemakers, such as James Healy of Dog Point Vineyards. He counters criticism of New Zealand having too many eggs in the Sauvignon basket by contending that the same criticism could be levelled at the Champagne region, which has more hectares planted than this country and a relatively narrow range of grape varieties too. And yet, as he says, demand for Champagne continues to grow. Demand for New Zealand wine is strong and the world is a big place, says Healy.

It could also be argued, as Master of Wine and Kumeu River winemaker Michael Brajkovich does, that we are not quite there yet, in terms of making great global classic wine styles. Ever the humble pragmatist, Brajkovich does concede that screwcaps have given our wines an edge when it comes to freshness, consistency and quality. The Kiwis interviewed in A Seat at the Table come across for the most part as modest, practical and eager to please by pushing boundaries to improve quality, whatever it takes to do so.

Whatever message wine or film fans take from A Seat at the Table, one thing is loud and clear in this film; Kiwis are open minded, have a modern outlook and willingness to embrace new technology, if it helps improve their wines. This stands in stark, sometimes humorous, contrast to French comments in the film, along the lines that tradition keeps their wine fresh and screwcaps are a step too far from tradition.

Fortunately, French winemakers no longer corner the entire global market when it comes to great classics. Their German, Italian and Spanish counterparts also produce great global classics and, frequently, an open minded approach (as do some of the French) about how to preserve the freshness of those wines. A Seat at the Table provides a spectacular snapshot in time and an interesting look at one of the keys to high quality winemaking today. Viva la screwcap.

Agri sustainability into the future

Q: What does sustainability mean?

Running on empty no good

OPINION: Fuelling things up is a constant part of our everyday lives on the farm.