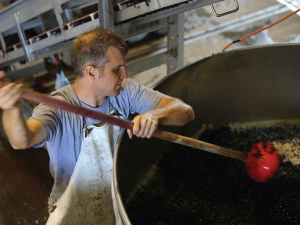 “But joking aside, it’s a huge honour,” he adds, determined that he and Neudorf’s owners, the Finn family, will charge on with goals established before Covid-19 shook the world and its wine market. Foremost among those is continuing the small Nelson company’s rare reputation, built over the past four decades by Tim and Judy Finn, who planted their first vines in 1978.

But they are also intent on upping the ante on Neudorf’s environmental credentials, using a new carbon assessment as a benchmark. “There’s a strong focus on paying our way in terms of how we do business sustainably,” Todd says, having already led the company through organic conversion and certification, alongside Neudorf’s Marketing Manager Rosie Finn, who grew up immersed in her parent’s wine company.

Todd joined Neudorf in 2012, following a business degree, international work as an IT contractor, then a career U-turn that saw him do a Lincoln wine and oenology degree. A stellar winemaker introduction at Quartz Reef and Felton Road in Central Otago led him on to Nelson.

“Neudorf was a winery that had a really good fit for what I wanted to do in terms of size, and the style of wines they were making,” he says. He also values the region’s diverse offering, which “flows out between each producer”, with Neudorf primarily focussed on Chardonnay and Pinot Noir, while others celebrate aromatics or Sauvignon Blanc. That’s Nelson’s challenge and its advantage, he says. “We may not have the loudest voice in the room, but we do have something to say.”

Like Tim, he is wed to hands-off winemaking, dedicated to simply “guiding” fruit from vineyard through wild ferment, to create wines of place and integrity. That minimal-intervention ethos is about trusting in fruit from a great site and working to ensure you “don’t bugger it up”, which is as complex as it sounds simple.

Tim calls Todd “extraordinarily talented” in and beyond the winery, with an appetite for new challenges. One of those challenges is building some scaffolding around their sustainability initiatives, with a new carbon map of the property and business, to be used as a baseline for reducing Neudorf’s footprint.

The company’s first carbon assessment audit is the latest in a series of moves to boost their environmental ambitions, including organic certification, the transition to lightweight bottles, and extending Neudorf’s rich array of trees. Many of those were planted around the winery when Neudorf was founded.

Over the past three years, viticulturist Stefan Brockley has been developing groves of natives at the edge of Neudorf’s home estate, and at its second vineyard, just minutes away, as well as planting phacelia and buckwheat between the rows.

The company’s long-term goals - including that evolving environmental legacy - are more important than ever as the wine world grapples with the market upheaval of Covid-19 and recession, Todd says. “It’s easy to say ‘don’t panic’, but you really have to make sure we stay focussed on what we are wanting to achieve and who we want to be.” There will likely be some sidestepping required to stay the course, but there’s opportunity to get leaner and better through tougher times, he adds.

Neudorf had harvested nearly 90 percent of its fruit by the time New Zealand’s Alert Level 4 lockdown kicked in, leaving just four days of picking, in “dribs and drabs”, under the strict health and safety criteria under which wine companies were operating. It was obviously a stressful period waiting to see what the restrictions would mean for wine, but once they were back on track, vintage ran with its usual rhythm, Todd says.

They had moderate yields, with what he calls a good-sized vintage, “as opposed to overly big or conversely too small”. Flowering was pretty positive, “but not amazing”, meaning Neudorf was “where we needed to be”. Pinot Noir looks great and the Chardonnay fruit shone on the vine, so he’s pretty confident on that front too. Some seasons favour a certain variety, but 2020 has been kind across the board, “which is nice to have”, Todd says.

Meanwhile, the company has seen some routes to market stop during lockdown, including on-premise. “But some have become stronger, ironically,” he says. Retail is doing well and Neudorf is making the most of its strong connection with a loyal consumer base that’s already familiar with the company’s “voice”.

Rosie has ensured they already have a strong digital “engine”, with a “well greased” online presence, he says. “We don’t have to build it from scratch… Now it’s about standing back and saying, ‘how do we do that even better?’ Rosie and I will go back and forth to see how can we fine-tune the engine we already have to make it bigger, stronger, better.”

That’s the short term work, says Todd. “In the long term, we will revert back to some kind of normal. Export markets will start again. Restaurants will open again. But it will take a bit of time before we get back to where we were and where we want to be.”

Could cow milk from New Zealand help the world fight against Covid-19?