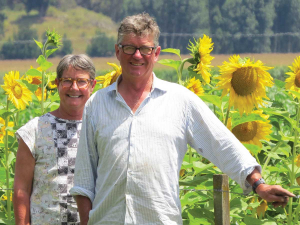 Jaunty sunflowers line the road to Millton Vineyard, in a joy-inducing yellow ‘hello’. From there, a wooden gate and a tree-draped driveway lead down to a rustic cellar door in a leafy glade, where an errant chook pecks determinedly at something in the soil. “When people come in here they feel the energy,” says Annie Millton, from what was once her family’s bull paddock. “I find that interesting.”

It’s the kind of comment that might have been disregarded in the past, part of a biodynamic philosophy people couldn’t measure or get their heads around. But in a world that’s suddenly eager for organics and sustainable agriculture, James and Annie Millton can talk about preparation 500, nettle tea, and an undefinable energy until the cows come home - quite literally.

It’s been 30 years since the Milltons produced their first biodynamic vintage in Manutuke, Gisborne, considered “crazy” for shunning paraquat and instead burying dung-filled cow horns in their vineyard, preparing for biodynamic preparations. But these days they’re lauded for tirelessly - and long thanklessly - forging a trail for organic winegrowers, who are suddenly rather thick on the ground. “It’s fantastic to see, because it was a very lonely road for a long time,” says Annie.

The couple were described as “organic trailblazers” when named New Zealand Winegrowers Fellows last year, and this year, when James took out the Gourmet Traveller Wine New Zealand Winemaker of the Year 2020 Leadership Award, organisers said “his vineyard, his wines and his personal example have given many other growers the motivation to become organic or biodynamic”. Annie says it has been nice to get recognition “for the hard work and the hard times we have persisted and worked through over all those years”.

Her father John Clark developed the Opou vineyard in 1969, as one of the region’s original growers. Given the post-war attitude to industrial farming and the guidance he sought from spray companies, it was ‘natural’ that his development included an arsenal of fungicides, herbicides and pesticides, James says.

He and Annie met when he began a cadetship with Montana Wines in the 1970s and in 1977 they set off to see the old wine world, soaking up all they could learn about barrel ferments, late harvest wine and a “completely different way of thinking”, says Annie. When they returned to Gisborne, they knew they wanted to follow the traditional approach, she adds. “They all thought we were really crazy.”

Annie’s parents were bemused that they would ignore modern technology to “do it the difficult way again”, but thinking outside the box came naturally to the couple. By 1983, they had replanted much of the Clark’s vineyard area, in 1984 they established The Millton Vineyard, and in 1985, their Riesling Late Harvest won a gold medal at the Air New Zealand Wine Awards, “and everyone went woah”, Annie says.

In 1989, Millton Vineyard became the first grape land in the country to obtain BioGro certification, thanks to Goethe not Google, with a dearth of research or case studies available. “You had to learn the knowledge from the masters in the old times,” says James, known for his esoteric take on soils and vines and wines. “As an artisan winegrower you farm with your head, your heart and your hands.”

They spent many years being “mocked”, but remained true to that philosophy, and slowly became mentors to the few and far between who were keen to follow. In those early days they didn’t put organic on the label, because there was a perception that it reflected poor quality wines, associated with “hippies and sandals”, Annie says. “Brown paper on bottles under willow trees by a brook, with water murmuring past,” agrees James with a smile.

These days some of New Zealand’s most sought-after wines are organic, but it’s only been in the past six or seven years that the Milltons have seen a shift in general attitudes, starting with more frequent mention in World of Fine Wine. “After that it just went ‘boom’, which is great,” says Annie. Now organic certification is powerful in the market, says James, describing Sustainable Winegrowers New Zealand as taking wine companies to the front steps of a “beautiful door”, but organic certification getting them past the increasing number of vigilant “gatekeepers” demanding true commitment.

Ironically, just as the wine world catches up with the Milltons, organics and biodynamics are becoming a “bit old fashioned”, he says. Instead, the buzz is around regenerative agriculture, including the ability of healthy soil to assist in the battle against climate change. In wine, that carries on from the work they’ve done for 30 years, growing vines without chemicals, and allowing the symbiotic relationship between plant and soil microbes to improve the outcomes of both. When a plant is growing in the soil “and has freedom of expression”, the roots exude an essence that sends a message to the microbes, informing them of the nutrients they want, he says. “The world wide web - where did it start? In the dirt.”

There’s also growing knowledge about the grapevine’s ability to fend for itself when allowed, with inbuilt defence mechanisms against insect attack, climatic change or fungal disturbance. “You’ll notice I haven’t used the word disease,” he says, enunciating it as dis-ease. “We farm ease, we don’t fight disease… Its’ a totally different way of doing things.”

The Millton family crest says Sine Fraude Fides, Latin for something like “honour without fraud”, and the couple says that for them, growing great wine is about “good intentions”. That’s in terms of relationships with the people they work with, the plants and soil they nurture, the sunflowers they plant on a neighbouring cornfield, the cows they cherish, and the wines they produce with care. “The score of your good intentions is the population of earthworms you have in the earth, and the abundance of other critters,” James adds. Even the process of weighing worms can be eye opening for people working in the vineyards. “If they realise there’s someone living there, they’ll tread more carefully.”