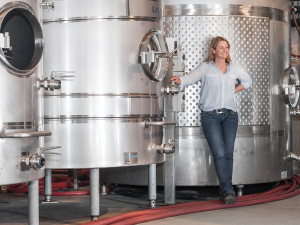 Crunching numbers in a sunless office isn’t the usual prelude to a career in winemaking. But it yielded just enough cooped-up-ness to render a young Nadine Cross, now winemaker at Peregrine, rather career-chafed: “I never intended to be an accountant. Sitting in the middle of an air-conditioned office and finishing each day without knowing what the weather had been like outside, was crazy.”

The memory of a childhood spent in gumboots on an Otago Peninsula sheep farm added to that chafing – as did a holiday job while at university, taking guided tours of the local albatross and penguin colonies. The impetus to switch careers and carve out a more land-leaning job was further hastened by the sudden death of her father. “I thought, shivers, life’s short. You’ve got to be doing something every day that you enjoy.”

It was around this time that Central Otago’s vineyards were starting to bloom. She’d clocked the wine industry’s growth while on family trips to that region and this helped spur her grape-wards. In 1996, after three years at a Dunedin accountancy firm, she handed her resignation to the managing partner: “When I told him I was off to study viticulture and winemaking at Lincoln his eyes lit up. He said, ‘wow that’s fantastic’, which was the last thing I thought he’d say. He also said he’d just bought some land at Bendigo and that one day I could be his winemaker – which at that time I thought was just a joke because I was intending to get involved in the business side of things.”

This wine-simpatico boss was Lindsay McLachlan – a man who says he spent 25 years pretending to be an accountant before establishing Peregrine in Central Otago. He never forgot that conversation with his fellow accountancy defector; 13 years after she’d left his accounting firm, Lindsay phoned Nadine to see if she was ready for that winemaking job. By then she’d finished her studies, fallen under the spell of the production side of the industry and cut her wine teeth in France’s Loire Valley, California’s Sonoma and Napa Valleys and in Marlborough at Seresin, Selaks, Villa Maria and Wither Hills. She was very ready.

Nadine says the wine industry is about a real team process. “There are lots of us involved in what we put out at the end of the day – in the vineyard and the winery.” The organic trophies were particularly gratifying for team Peregrine. “It’s been a huge effort and a vision driven by Lindsay 10 years ago about how he wanted to manage his land.” Cosseted by a team of cows, sheep, goats, pigs and chooks who add ground-clearing, bug-chomping and manure production expertise to the mix, the Peregrine soil is extremely happy.

The full Peregrine range became certified organic in 2017, after a decade-long conversion period. With several reformed accountants in the Peregrine mix, there’s plenty of commercial nous there to ensure the business has sustainable organic legs. But it was for a whole raft of reasons that Lindsay chose the organic path. Nadine says it’s about the health of the soil, the health of the vines, the health of the people working in the vines, and the family living on the land. “It’s all of those benefits. Twenty-five percent of Central Otago is now managed organically – which is huge. It’s really exciting for the region.”

Peregrine has never tooted its organic status very loudly, says Nadine. “For us, the quality of the wine is the main thing and then people find out that we’re organic. We haven’t pushed it as a marketing thing. We’ve got great sites, it’s a family business, and we’re making amazing wine – that’s our main message. And then, by the way, we’re organic.”

For Nadine, winemaking is about letting the land and environment speak through the wine. “It’s about getting the best quality off all the little sites that we have. I guess my job is about making a lot of really small decisions about things that impact on that overall quality and on what we’re reflecting from the land. We talk about ‘vine age’ but there’s viticulturist age and winemaker age as well. For me, some of the best high-quality wines in New Zealand have that combination of vine age and a knowledgeable viticulturist and winemaker. Some of the younger people I see coming into the industry are very quick to want to move ahead and be the winemaker somewhere, and I think, ‘don’t do that – you can learn so much from people’. The first 15 years of my career were about learning from lots of people.”

Her biggest challenge in winemaking? “Lately it’s my teeth! Teeth issues from swishing wine around my mouth for 25 years. That’s what I’ve been telling my assistant: get yourself some dental insurance right now or you’ll be sending your salary to the dentist!”

A wine career adds up for Nadine Cross