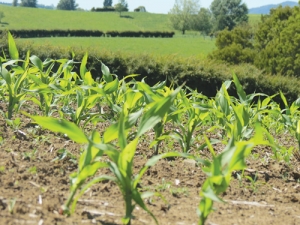 Some contractors are planting 50% less maize this year.

Plantings of one the dairy industry's most popular supplements is way down right across the country.

So says the president of Rural Contractors New Zealand, Steve Levet, who reports that one major contractor has planted 50% less maize this season than last.

In Manawatu the weather has been wet and cold and contractors have been unable to plant crops on some farms.

Levet says while the weather has squeezed some maize plantings, of greater effect is the lower payout which is forcing farmers to cut costs: maize is one casualty.

"Farmer confidence has taken another hit. I was asked by a government official if farmers were planting more crops to help cope with El Nino and my answer was 'no'. They are unloading any stock that won't make them money and with the beef price up, until recently this strategy has worked. But the price has now dropped. Yes crops are going in but I wouldn't say there is more going in: maize in particular is down."

Levet says in Northland the weather has been good enough to sow crops, but he's heard some farmers don't have the money to put down a crop. In Southland a record amount of fodder beet is being sown, but in Manawatu a cold spring has made it hard to establish crops.

Meanwhile DairyNZ's senior developer for feed and farm systems, Kim Marshlan, says she's not surprised at the reduction in maize plantings, especially that grown by contractors. With the lower payout they are probably banking on less demand as many farmers focus on growing grass and relying less on supplements.

Marshlan says a key DairyNZ messages to farmers in areas likely to be hit by dry El Nino weather is start planning now. DairyNZ has met with farmers in Wairarapa, eastern Bay of Plenty and Northland to get them thinking about making an action plan.

"By planning now what their decisions points will be if things get really dry, it takes a lot of stress out of the situation. We are encouraging farmers to complete a summer management plan and there are resources to help them do that. Hopefully by sitting down and planning ahead now they can work out what they can afford to do and what their options are."

One option is summer crops and Marshlan says even though sowing time is nearly over there is still time to plant crops for a valuable summer feed buffer in some areas.

"Some crops can still be planted until early December. Sweet sudan grass, sorghum-sudan grass hybrids and greenfeed maize maintain relatively high levels of production during hot and dry conditions and can reduce the risk of having inadequate forage during the summer," she says.

Marshlan says sudan grass and sorghum-sudan grass hybrids are primarily used for grazing and cutting because of their high regrowth potential. They regrow faster than forage sorghum and recover quickly after grazing or cutting.

Sorghums are known for being drought tolerant, she says.

"They absorb water more efficiently because they have twice as many secondary roots per unit of primary root as maize and have half as much leaf area and a waxier leaf surface – traits that help withstand drought and provide feed during summer pasture shortages. Sudan grass and sorghum-sudan grass can be grazed 35-45 days after planting."

Marshlan says greenfeed maize can yield larger quantities of green fodder per hectare than most other alternative summer fodder crops and summer pasture. She says it can be cut and carried to the herd or break fed. But she points out that the summer greenfeed option is not suitable for silage.

She says nitrate poisoning may be an issue with any crop that grows rapidly, has been drought stressed or has been frosted. Crops should be sampled and analysed before grazing/cutting if nitrate buildup is suspected.

OPINION: Managing our dairy sector's impacts inevitably attracts a range of views. Should we do more, less or stay the same? We produce the lowest emissions dairy products in the world, so why do more?