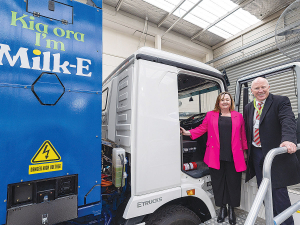 A humble yet essential part of the supply chain; no one who travels the highways of New Zealand could have missed one of Fonterra’s milk tankers.

That fleet of 500 truck and trailers covers around 90 million kilometres each year, so you would expect the dairy co-operative to be actively looking at ways to reduce operating costs. Step forward the Milk-E.

At the launch of the company’s, and probably the world’s, first electric bulk milk tanker, chief operating officer Fraser Whineray – formerly of Mercury, a 100% renewable electricity company – noted the dramatic shift in transport over time from a 3.5 tonne flat-bed truck to the 46 tonne goliaths we see on the roads today.

Stressing the need to find sustainable solutions for Fonterra’s transport division, Whineray praised the co-funding from the Government’s Low Emissions Transport Fund (LEFT), which is administered by EECA (Energy Efficiency and Conservation Authority), in helping to fund the development that will ultimately reduction CO2, with fuels costs of only 30c per litre.

Developed at the Morrinsville Transport site that currently sees 11 staff build around 8 trucks and 30 trailers every year, the Milk-E has the same general dimensions as a classic milk tanker and will operate at the same GVM of 46 tonnes. Said to offer a range of about 140km, the total load will be 28,000 litres, about 2,000 litres less than a classic tanker, to accommodate the weight of the battery.

Taking around three hours to recharge, the truck will operate exclusively on the flat land surrounding the Waitoa plant in Waikato, offering flat terrain and shorts trips. The co-op is developing a battery swap system it says will only take 6 minutes, so the truck doesn’t sit idle during recharging.

Named by Fonterra farmer Stephen Todd from Murchison, Milk-E is part of Fonterra’s fleet decarbonisation work, one of several programmes helping the co-op towards becoming a leader in sustainability.

The cab and chassis were supplied by XCMG, a Chinese construction machinery group, with the build taking about 36 days, compared to a normal tanker that takes about 27 days to build.

Following a fierce but friendly 'Name the E-tanker' competition, which was open to Fonterra employees, farmers and the general public, the co-op settled for Milk-E.

It's about the same size as a regular tanker. It will operate at 46 tonne GVM (gross vehicle mass) with the trailer.

It has a range of about 140km on a full charge (but this is still being tested).

The cab and chassis are from XCMG - a Chinese construction machinery group. The team will fit the tank to it, which will be the same as with Fonterra's regular tankers.

In New Zealand, yes. As for in the world, Fonterra isn't sure yet, they are still checking that out.

6. How much milk will it carry?

The tank will be the same size as on Fonterra's regular tanker with the capacity to carry 28,000 litres. However, because the truck part of the tanker is a bit heavier with the battery, it will carry around 2,300 litres of milk less, to keep within its permitted weight.

7. How long does it take to charge?

It will take about three hours to charge, and they will be operating it on a battery swap system so the truck isn't lying idle while charging. The team will be able to swap the battery out in about six minutes.

8. What will the trial measure?

A number of factors including how far it can go, how easy it is to charge, milk collection, maintenance, efficiency, cost, and driver comfort and safety. This is very much a trial with the aim of learning more about heavy vehicle E-transport in a rural setting.

The build took about 36 days. A normal tanker takes about 27 days to build, but this took a bit longer due to some of the new tech.