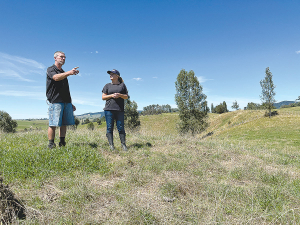 NIWA researcher Fleur Matheson with farmer Grant Wills on his family’s property in the Waikato region.

A Waikato dairy farm which began its first riparian planting project 20 years ago now stands as an exemplar for rural land users, backed by science and clever long-term planning.

The farm has been in family ownership since 1931 and was originally a sheep and beef operation. Grant and Karo took over in the late 1980s and slowly shifted into dairy.

Grant and Karo began fencing off waterways and riparian planting in 2002, just before subsidies for such projects were available.

“We have two main water ways through the property, so I divided those into five areas and came up with a plan to plant one area each year.

“Subsidies for riparian planting started in 2003 and we applied up until 2008. After that I didn’t bother applying anymore because I could see the benefits from a farm management perspective.”

Fencing slopes meant losing some grazing area but that was offset by other benefits.

“We originally had our fences close to the waterways but where we had steep slopes, we moved fences to the top.

“We had been losing about one or two cows a year which had got bogged down in creeks or fallen down slopes so moving the fences higher eliminated those problems.”

Grant points out one steep riparian slope near a stream where there is a trial planting of rewarewa and other bee-loving native shrubs.

“So while we’ve fenced it off and it’s not dairy pasture now, it can still grow a productive income in years to come.”

They have also widened riparian buffers extensively in some places to take in and protect slumping and eroding hillslopes, which will help to keep this material from moving down into streams.

“We’ve tested the water where it enters the property and where it leaves, and it shows the water quality has improved through our farm.”

Grant and Karo won the Supreme Award at the 2013 Waikato Ballance Farm Environment Awards, part of which recognised their efforts improving water quality.

In recent years, the couple have been working with NIWA to gain insights into how well their riparian plants have performed and advise on future projects.

Fleur Matheson is the leader for NIWA’s mitigation systems programme which includes research on riparian buffers.

She said science has advanced our understanding of how riparian buffers can make a positive difference.

“A grass buffer will be best for trapping sediment in overland runoff, and a buffer with trees and shrubs will be best able to remove dissolved nutrients from shallow groundwater.

“Including any small wet areas or wetlands within a riparian buffer to protect them will also help with nitrate removal.”

Fleur said the best riparian buffers will be ones that combine a grass buffer at the field edge with trees and shrubs closer to the stream, and flexible sedges on the stream margins.

“This is the basic design that we recommend to farmers. We think that a buffer width that is about 10% of the length of the hillslope draining to the stream channel is ideal.

“On average we expect this to trap about 75% of sediment in runoff and it will also trap the nitrogen and phosphorus that it bound up in that sediment.”

Riparian buffers also have an important role to play in climate change.

Trees and shrubs store significant amounts of carbon as they grow by removing the greenhouse gas carbon dioxide from the air.

“Our best estimates at present are that a 1ha area of riparian buffer planted in actively growing native shrubs and trees may be able to sequester up to about 5 tonnes of carbon dioxide equivalent per year.”

Grant said it was easy to make a farm management decision when it was backed by science.

“Since NIWA has got the science behind it, to back up these sorts of projects, then I have full confidence that it’s going to be good for the environment and for the farm.”

When planning a project it is important to be clear what current conditions exist, what information you need to collect to determine this and importantly a clear understanding of the goals you wish to achieve.