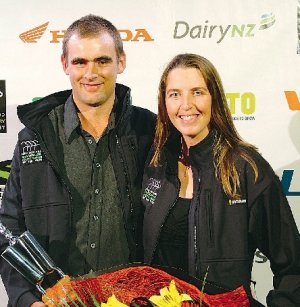 THE 2012 Waikato Sharemilker/Equity Farmer of the Year, Barry and Nicky McTamney, take the next step in their dairy farming career in June when they enter an equity partnership.

The couple won the top award and collected $15,000 in prizes at the recent Waikato Dairy Industry Awards.

The other big winners were Thomas White, who won the Waikato Farm Manager of the Year title, and Mark Jacobs, the 2012 Waikato Dairy Trainee of the Year.

Barry and Nicky are currently 50% sharemilking 275 cows for the MacLennan Family Trust on an 82ha farm near Otorohanga.

In June they will become equity partners and managers of a 500-cow farm at Maihiihi and they plan to buy it outright within 10 years.

They say a key to their success is keeping it simple.

“Simple, repeatable systems provide consistent performance in the face of climatic and economic volatility. Thorough recording and monitoring enables informed decisions to be made early, versus reactions to be made too early or too late or not at all.

“And while we run a simple system, our focus on getting the basics right has provided our business with added income streams.”

The couple, who hold a Bachelor of Applied Science in Forestry and Agriculture (Barry) and Diploma in Veterinary Nursing (Nicky), have worked their way up the industry for 10 years. They say the awards reinforce goals and the steps needed to achieve these goals.

Thomas White, is contract milking 390 cows for his parents, Philip and Maree White, on their 112ha Putaruru farm. He won $10,000 in cash and prizes.

It was the first time White (23) had entered. “I entered for the opportunity to benchmark myself and to get feedback from the judges on my strengths and weaknesses.”

He says a strength is farming on a good farm, in a good district and community.  “Another key strength is being able to work together as a family to achieve our individual personal and business goals.”

White, who has a Diploma in Agriculture, says he plans to progress through sharemilking to farm ownership.

It has been a goal of Jacobs, to enter the dairy awards for the past two years. This year he entered and won, taking home $5500 in prizes.

“I primarily entered the competition to gauge my skills against my peers, gain important and helpful industry connections and for the experience of competing.”

Jacobs (25) is herd manager on a 400-cow farm owned by Sir Patrick Hogan at Cambridge.

He has been dairy farming for four years and is currently studying with AgITO to improve his skills and knowledge.

He plans to continue studying towards a Bachelor of Agriculture while progressing to become general manager on a high input, large scale dairy farm.

“In the short term I would like to work overseas and gain some perspective on how dairy farms are run and how dairy farming is perceived around the globe.”

Barry and Nicky McTamney will host a field day on April 3.