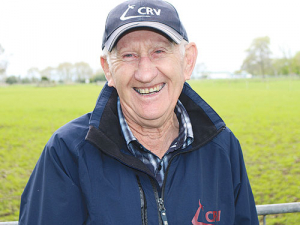 AI technician Don Shaw (79) has been surrounded by dairy cows his entire life, bringing many calves into the world.

Raised on an Ohaupo farm, Shaw is a fourth generation New Zealand dairy farmer. For the last 62 years he’s worked as an AI technician, inseminating about 250,000 cows.

Otherwise he works as a TOP (traits other than production) inspector, sire-proving heifers and inspecting older cows for Jersey NZ members and consulting to several local farmers.

“You weren’t supposed to train until you were 18, but I was going to turn 18 by the time the AB season started so I was able to train,” says Shaw, who lives in Te Awamutu.

“It was different then from today. We went to stay in the Grand Hotel in Hood Street, Hamilton, for two weeks and every morning we were picked up by the supervisor and we’d go to the town milk herds in the Hamilton area.

“One trainee in my group was Dryden Spring who became the chairman of the New Zealand Dairy Board, so I was in good company.”

Herds in the mid-1950s were much smaller than now.

Visiting small farms with three other trainees limited Shaw to inseminating only one or two cows at each farm.

“Today they go to a school in a freezing works in Morrinsville, and there get to inseminate 100 to 120 cows over five days. When I trained I never had 120 cows to practice on.”

Shaw later worked with South Auckland Herd Improvement for two years then did private work as an independent AI technician, before spending 40 years working at CRV Ambreed as a technician and sales consultant.

It’s been a busy role but a rewarding one. I’ve got a passion for genetics, and for animals,” he says.

CRV Ambreed national AI manager Cara O’Connor says Shaw is an institution in the AI industry and happy to share his knowledge and skills.