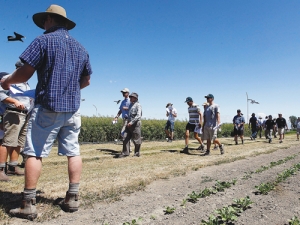 Wilkinson said arable farmers have enough feed on their land to help livestock farmers cope with the coming dry spell; they just need to collaborate to match each other's demands.

Wilkinson and FAR's Elin Arnaudin were presenting in 30 degree heat at FAR's arable research site. Twelve 30-minute presentations were spread around the site, three underway at any one time. Each was repeated after lunch.

Topics included disease management in cereals, how grazing animals affect the distribution of nitrogen in soil, building on farm diversity, improving potato yields through better understanding of the soil and how can Denmark capture market share in the world seed market while they have the world's strictest environmental laws?

Wilkinson and Arnaudin's presentations were of special interest to dairy farmers as they discussed FAR research into fodder beet and irrigation,
and the benefits of cereal silage to ruminants.

FAR has been trialling fodder beet for about 12 months, at this stage seeing the highest yields when the crop is having full evapo-transpiration replacement weekly. The results of this trial will be fed into DairyNZ's Forages for Reduced Nitrate Leaching programme now underway.

The value of fodder beet was recently stated by North Canterbury dairy farmer Bob Bolanos: he said he doubted his operation would have broken even if it weren't for the yields and cost savings they got from fodder beet.

Wilkinson is sometimes branded a heretic for claiming that grass is not a balanced diet for dairy cows. He considers fodder beet – a low-protein feed – a perfect complement to a high protein grass diet. He also says one benefit of a low protein diet is that it dilutes the nitrogen.

Question-and-answer sessions after each presentation extended their value to farmers. Their access to the scientists meant the sharing of information was 'undiluted'.