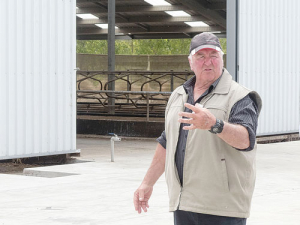 Pareora dairy farmer Peter Collins has paid tribute to the man at the centre of the Mycoplasma bovis outbreak in helping him set up his huge new dairy barn system.

“I was very lucky to have Aad Van Leeuwen to help me with it,” says Collins.

Collins converted his 800ha farm 10km south of Timaru about three years ago and built the 1200-capacity freestall barn two years ago. The farm now milks 1200 cows, including some winter milkers, and supplies the Oceania Dairy milk powder plant at Glenavy.

With the efficiencies afforded by the barn they are on track to produce 600kgMS/cow this season.

Speaking to farm visitors during the recent Centre For Dairy Excellence Dairy Barns conference, Collins said the barn complex cost $3 million and still needs $600,000 more to complete it with adjoining feed bunkers. Feed is now stored in bunkers 1km away on the property. In the meantime Collins has bought a large mixer wagon to transport it.

He acknowledges the advice he got in setting up from Aad Van Leeuwen, whose 16-farm Van Leeuwen Dairy Group further south near Oamaru is now at the centre of the Mycoplasma outbreak.

However, Collins chose a rotary shed after going over the figures with his banker and deciding they could not make robotic milking stack up.

An unusual feature of the barn is extensive rubber flooring -- not just in the cows’ resting stalls -- installed for the animals’ comfort and foot health. “People laughed at us and said ‘what a waste of money’,” admitted Collins.

“So we put the rubber on the floor and in the first season I lost six cows to the scrapers and I couldn’t figure out what the hell I was doing wrong,” said Collins.

“Then Aad came up and said ‘no, what you’re doing wrong is you haven’t put in your stoppers’. So he showed me what to do. If a cow gets caught at the end of the shed it automatically turns everything off now. We haven’t lost a cow this season.”

Collins said the key is training young heifers to lie in the stalls.

“So our heifers will be coming in here probably the end of February and they will be trained -- trained properly -- and that’s the secret.

“You can’t bring in an old cow that’s been on grass all her life and think she’s going to lie there. It’s all about the barn system – training the young stock.”

Collins also paid tribute to his farm manager Colin Muir who is also finding his way in the barn system having come from a conventional grass farm.

“So with everything working together -- good nutritionist, good farm manager -- we’re on a winner here,” said Collins. “We want to achieve 600 kgMS. Colin says we’re on the mark now, that we will achieve it this year.”

With the cows now on pasture for the summer, Muir said the cows are in the barn about two-thirds of the year.

At 4.6 cows/ha stocking rate they have to grow a lot of grass to feed them, and he envisages bringing them into the barn early this season.

Muir says they are now at least 12% up on production for November. In September they were only 2% up for the month, when the quality of feed had affected production. “So when we get the feed right in the barn who knows what we can achieve?”

“We’re trying get rid of these little brown things; we have some brown cows, just to remind us why we don’t have a whole herd of them,” he joked.