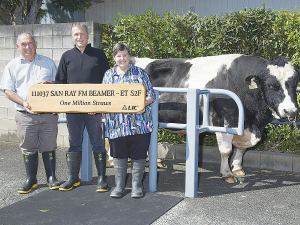 The Holstein-Friesian bull, San Ray FM Beamer-ET S2F, or 'Beamer' as he is known to farmers, was inducted into an elite animal 'Hall of Fame' this month by LIC.

The honour is shared with Beamer's breeders, Ray and Sandra Hocking of Carterton, who supplied the bull to LIC as a calf after he was selected as a contender for the co-op's elite teams of artificial breeding bulls based on his high generic merit.

Ray Hocking said they have been proud to follow Beamer's success, seeing him be selected for the LIC bull team and then be so popular with farmers, for his high genetic merit, overall conformation traits and ability to breed capacious daughters with good udders.

"Beamer has a lot of things that just 'click' with New Zealand farmers. His daughters are not overly tall but they are very wide. Production wise, he's also got great numbers and a perfect balance of protein to fat," Ray said.

"As breeders we are very proud of his achievements. We know he has delivered a lot of value to a lot of farmers around New Zealand."

LIC livestock selection manager, Simon Worth, says Beamer is the 58th bull to be inducted into the co-op's Hall of Fame, an honour which is strictly reserved for animals that have delivered a significant contribution to the dairy industry, dating back to 1954.

"Beamer well and truly meets that criteria. Not only has he fathered more than 170,000 daughters for New Zealand's dairy herd but he has also sired more than 92 sons and 54 grandsons who are now following in his footsteps and achieving tremendous success."

He is also one of only four bulls in New Zealand's 70-year history of AB to surpass more than one million straws of semen for artificial insemination.

"Beamer is an outstanding bull and his contribution will have a prolonged effect on New Zealand farms for many years to come.

"He's always had a great nature too and is a favourite with our farm staff - a quality that woul be appreciated in his daughters too I'm sure.

"He enjoys a good scratch behind the ears and is often seen in his paddock sitting like a dog, waiting patiently and keeping an eye on his surroundings," Worth said.

His induction into the Hall of Fame was announced to some of the country's top bull breeders who gathered in Hamilton for LIC's Breeders' Day event on 5 May.

The annual LIC event celebrates an exclusive group of farmers who supplied a bull calf to LIC which went on to form part of the co-op's elite teams of artificial breeding bulls the year before.

How Beamer Got His Name

'San Ray' is the name of his breeder's Stud.

Beamer - the name chosen for him by LIC Livestock Selection staff.

S2F is his registration status from the breed association.