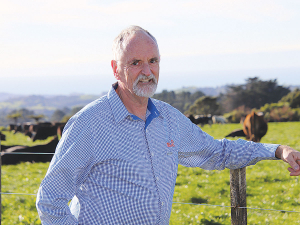 Chris Collier says most New Zealand farmers have been too focused on weaning and calving weights.

A farm adviser for two decades with the former Ministry of Agriculture and Fisheries (MAF), Collier, since 2017, has been a trailblazer for rearing calves using high volumes of milk fed once-a-day (OAD) with the support of high-performance probiotic, Calf Xtreme.

In the first 12 months after he founded Probiotic Revolution, he had 22,000 calves on the programme. That number has now swelled to 88,000 and together with his wife Lorraine, and their son (a former medical scientist), this family business is having a quantifiable impact on calf rearing throughout the country.

Collier points to the lack of understanding among the rank and file regarding the importance of maximising and monitoring calf growth at a younger age.

“If a calf grows faster in the first three to five weeks of its life, it lays down more tissue in its developing udder, which means she milks better as a two-year-old, regardless of her liveweight,” Chris said.

“That science is well documented.

“This isn’t widely known by New Zealand farmers, but it’s well understood in Europe. That window is a critical stage of their development to allow those calves to get in-calf easily and produce to their potential in the future.”

Calf Xtreme includes levels of micro-encapsulated probiotics, beneficial bacteria, digestive enzymes, and live yeast – promoting immunity, recovery, and digestion. The micro-encapsulation is crucial because it allows the probiotics to bypass stomach acid (which can kill bacteria) so it can safely reach the lower GI tract which drives up to 80% of a mammal’s immune system.

Collier says that traditionally farmers had avoided nutritional scours by feeding lower volumes of milk twice-aday (TAD), but that the probiotics allowed a new school of thought.

“The abomasum capacity of a young Friesian calf is only 1.2 litres of milk, so when farmers feed three litres, milk is spilling into the rumen anyway and the rumen is the wrong place for milk digestion.

“That’s why automatic calf feeders do small amounts of milk regularly. But if we could stabilise the rumen pH – and our unique high-strength probiotic formulations will do that – we can feed higher rates without getting nutritional scours.

“I think that most nutritional scours start because milk is in the rumen.”

Probiotic Revolution’s work in this space has drawn the interest of its Australian counterparts, who are interested in what is happening within New Zealand and how that can be adopted by Australian dairy farmers.

He says the strength of their probiotics is in the billions of Colony Forming Units (other brands are still in the millions) – along with the synchronistic teamwork of the bacteria refined by the grandfather of the probiotic conversation – Australian Allan Hain.

“There is a difference between feeding fresh milk and colostrum and sometimes you get calves that get scours because they’ve been changed from one milk to another. Or perhaps the milk is inconsistent in temperature, or it sours in the rumen and upsets their whole digestive system.”