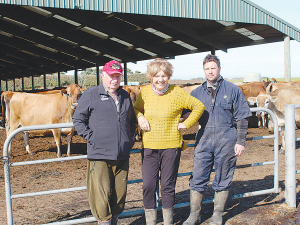 Paul and Christine Frecklington milk just over 1,000 cows across two farms at Tangimoana in the Manawatu. The herds average around 617 kgMS/cow, but the smaller herd has produced up to 670kgMS in good seasons.

The couple says it has been a journey to achieve these results. Early on in their farming career they found it frustrating being at the mercy of the weather and other variables beyond their control.

"We had good quality genetics that were capable of high production but they milked off their backs and it was a struggle to keep them in condition through wet winters or summer droughts."

The lightbulb moment for the couple was at a conference in Bali back in 1993 when they heard Te Awamutu-based consultant Sue Macky present. She talked about how better cow nutrition would improve production and cow health and allow farmers to maximise the potential of good genetics.

"Sue told us that how you feed your cows two weeks before and two weeks after calving was critical to set the cow up for the season," says Paul.

Since then, feeding their herd well, lifting weaning weights for calves, and growing young stock to target liveweights has become a focus of the Frecklington's business.

"When we go on tours with Jersey groups, everyone looks at the cows. I look at the management systems and the way they are fed. I have learned a lot from Australian and American systems and taken the best of that and applied to our own business," says Paul.

The farm is run as a system 5 with around 70 hectares of maize grown on a support lock, and a small amount of soya-PKE blend purchased in as well as some barley straw.

Paul says that having the farm virtually self-contained in terms of feed insulates them from price fluctuations.

One farm has a herd home and the other a feed pad to maximise utilisation of feed, while also protecting pastures in wetter weather.

"From September to December we mow paddocks pre-grazing to make it easier for the cows to consume more and maintain pasture quality. We also re-grass 10-15% of the farm annually.

"We are fortunate to have a farm manager who is highly knowledgeable in this area and he is involved in trialling different pasture species on farm," says Paul.

Also vital to the herd's success is the quality of their young stock. Calves are weaned at around 100kg and fed meal to support their continued growth.

"We manae all of our young stock ourselves and are very proud of how our heifers are grown out."

Paul has farmed both Jerseys and crossbreds in his career and considers himself a commercial farmer.

"I don't have any breed preference just whatever is profitable, but Christine loves Jerseys.

"Christine grew up with parents who were Jersey breeders, and when we married she bought a purebred Jersey with her. That animal formed the foundation of our Cartref Jersey stud."

The herd is mostly overseas genetics but Paul believes that the production is also possible from quality New Zealand genetics.

The couple's surplus calves are in high demand with most being sold as natural mating sires or as heifer replacements in other herds.