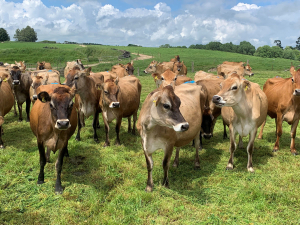 Herb Wuest's herd of Jersey cows will go on sale on 5th April.

The onfarm sale is being held by NZ Farmers Livestock on the vendor’s farm at Matamata on Tuesday (April 5th).

Vendor, Herb Wuest, said the cows have 22 years of selected breeding behind them.

“I bought the nucleus of the herd back in the mid 1990s and since then have personally selected and nominated AB sires (from the two big New Zealand genetics companies) which complement each cow.

“I never chased BW. My priority was to breed cows that have exceptional functional traits – capacity, fertility, stature, protein, temperament and udder conformation. The fact they have high BW is one indication of their quality,” Wuest said.

Herb Wuest said deciding to sell the young stock has been “tough but my head had to over-rule my heart. We are downsizing and I can’t take the entire herd with us.”

The onfarm auction will take place at the Wuest farm, 75 Rapurapu Road, Matamata at 12 noon on Tuesday 5 April. Farmers have the option to either attend the sale and bid ringside, or online via MyLivestock.co.nz.

The sale of elite in-milk cows from New Zealand’s highest BW crossbred herd is attracting interest from dairy farmers across the country.