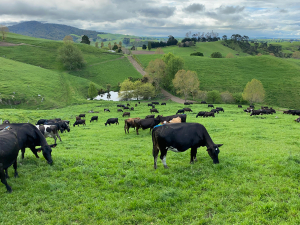 The on-farm auction (which will also be live-streamed) of around 120 cows will take place at midday on November 16 at Stony Creek Farm.

The sale of elite in-milk cows from New Zealand’s highest BW crossbred herd is attracting interest from dairy farmers across the country.

The on-farm auction (which will also be live-streamed) of around 120 cows will take place at midday on November 16 at Stony Creek Farm, 61 Ruakawa Road, Walton.

“The 12th highest BW crossbred cow in New Zealand, with BW 370, is also included in the sale.”

Carruthers said the herd has produced 327kgMS per cow “which seems modest until you consider they have produced this on steep country”.

“Seeing the land they’re coming off – combined with their BW – is all the reassurance farmers need to know these cows represent a spectacular investment. They will move exceptionally well and add tremendous value to any herd.”

Vendor Ben Watson said the cows have been farmed under System two, with a stocking rate of 3.3 cows /hectare on very steep country.

“We could milk two cows per ha and produce 550kgMS/cow with the feed available on the farm, but this is almost impossible to achieve on the hills by a non-owner operator.

“Our cows use a lot of energy to walk the hills and harvest the grass, they are fed mostly pasture and PKE and maize which is grown on farm. We can only mow about 10% of the milking platform on this farm and the rest is extreme hill.

“This is the steepest and smallest of several farms we own but is where we invest all of our breeding pressure for maximum genetic gain. Cows are herd tested 4-5 times per year, we alternate milking times as much as possible and use 7 in 10 and OAD.

“Genetic gain is maximised by shortening the generation interval and maximising selection pressure. All of these elements, and the way these cows have been farmed, give purchasers reassurance that their BW is an accurate representation of their genetic worth and potential.”