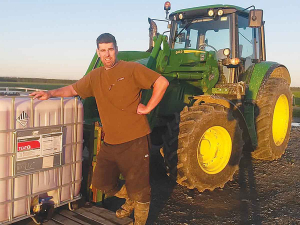 When it comes to mastitis prevention, farmer Enda Hawe targets specific cows based on herd results.

A former Sharemilker of the Year, Enda Hawe has run his own farm in Rakaia for the last two years under the banner Emerald Pastures – a nod to his homeland, Ireland.

His approach to drying off has evolved over the years, with the aim now being mastitis prevention, including a real focus on the importance of maintaining excellent teat condition.

Rather than opting for blanket use of antibiotics when drying off, he targets specific cows based on their performance in herd test results.

“Approaching drying off, I like to wind the cows down quite hard. I minimise the green feed, and substitute with straw to reduce the quantity of milk flow,” says Hawe. “I make sure I get the teat spray on there. And I don’t blanket dry cow [therapy]. I selectively chose the cows to administer dry cow therapy (DCT) to, based on their herd tests.”

He says that by keeping somatic cell counts down all year by using the right products, he doesn’t end up with an unnecessarily high DCT bill at the end of the season. This approach to drying off has worked well for him for over 10 years now.

Part of Hawe’s regime during the last decade has been choosing the right teatspray – in his case, Deosan TeatX. Eleven years ago, he saw better teat condition within a week of first using the product and has stuck with it ever since. He says he started using it as a teatspray before his cows calved, aiming to lift teat condition in his herd – a key component of his ‘prevention’ approach to mastitis.

In the same way that his selective use of DCT saves him money, using a teatspray with a fast-acting surfactant formulation that delivers the ‘actives’ to where the bugs are, pays dividends. If the active ingredient doesn’t get into skin, it is probably a waste of money.

Science backs up Hawe’s belief in incorporating good teatspray into an effective mastitis prevention regime. Otago University Professor Greg Cook, whose work has focused on antimicrobial resistance, teamed up with Kiwi-owned agrichemical company, Deosan, to advance the science around teatsprays – sanitizing products that prevent infections in the first place, reducing the need for antibiotics later on.

“Enhancing rather than hindering its natural defence mechanisms against mastitis is more about skin condition than killing bugs,” says Bodle. “So we started by reviewing our surfactant formulation to maintain a very fast penetration speed into the skin surface, then on emolliency to support skin condition, and then the level of active ingredient to kill mastitis bugs.”