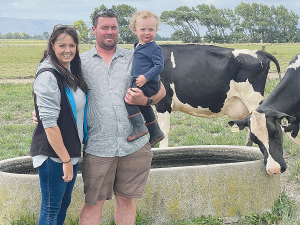 Ron and Amy Baker are a busy couple. They are not only the owners of a 60ha dairy farm on the outskirts of Palmerston North but are also the holders of a 14-year-old contract milking position on the neighbouring farm.

Ollie, 2, completes the picture of a driven, yet family-oriented couple who are fully focused on achieving their goals.

Ron, born in Taranaki, and Manawatū-born Amy work together but apart in their wider farming business.

Amy has been contract milking on Grant and Nicky Kearins’ farm for 14 seasons, milking 450 cows. The Bakers purchased their own farm four seasons ago, with Ron taking responsibility for the home farm.

The herd split calves, with AI for four weeks in the spring, and six weeks in the autumn; the herd undertakes no natural mating whatsoever.

The couple keeps around 15% of total calves as replacements.

Ron says they have always had Holstein Friesian cattle, and when they took over the farm they ended up with a few more.

“We like the fact that the gene pool of the Holstein Friesian breed is so much bigger to breed from,” Ron says.

“There is always a bull out there to correctively mate a cow to.”

He says they have been more milk-driven in their breeding decisions in recent years.

“Milk components are our current priority when choosing bulls, whilst continuing to protect udders, feet and legs.”

“He is a really balanced bull, both in terms of type and production,” Ron says. “He is a new bull, and we hope to get ahead of the game. We already love the calves coming through.”

Other standout cows in the herd include three impressive cows sired by Gillette Windbrook.

The herd’s Dundee Lilly family is also a favourite in terms of high-producing cows.

Larkspur Beemer Libby-ET VG87, born 2017, in particular has proven to be a very successful cow in recent years.

Sired by Pol Butte MC Beemer-ET, she was the 2019 Holstein Friesian and All Breeds Reserve North Island Champion Cow, winning the two-year-old in-milk class, best udder in her age group, and placing second in the All Breeds Two-year-old In-Milk class.

Whip, who was exhibited by Lara Honeyfield, is the grand-daughter of the top-producing cow in the couple’s herd, Rewa GW Final Wish EX2. This season, at nine-years-old, Wish produced 1,114 kgMS (14,761L) in a 305-day lactation, a herd record for the Bakers.

It was a proud moment for the couple, who have had to step back from showing as much as they used to.

“Before we bought the farm, we used to take cows to the Waikato and Taranaki Shows,” Ron says.

“But since we have taken on the other farm, we just don’t have time to get away as much as we’d like to.

“Ollie loves the farming lifestyle, so hopefully when he’s a little bit older we’ll be able to take him along with us.”

Fusion Genetics is also enjoying more general farm business successes: the Bakers won the Ward 5 2021 Nutritech Performance Award, achieving the highest dollar earning herd average in their region, based on the Fonterra A+B-C payment for the 2019/20 season, with $4,530.54.