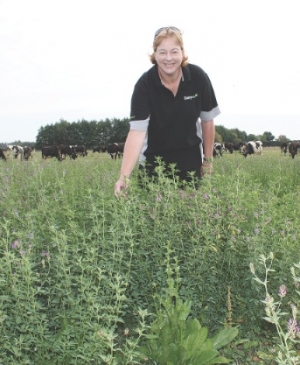 A THREE-YEAR experiment with mixed pastures could have big implications for future management of environmental impacts.

Results showed cows in the trials fed on mixed pasture excrete half the amount of nitrogen (N) in their urine compared to cows on standard pasture, the recent DairyNZ Farmers Forum in Whangarei heard from senior scientist Sharon Woodward.

“The big thing for the future is that feeding mixed pastures has had a major impact on reducing urinary N losses from the cows,” Woodward said. “This has implications for greenhouse gas emissions and nitrate leaching.”

All pastures were set up three years ago on the Scott Research Farm in Hamilton and all received the same treatment for maintenance fertiliser, urea application, grazing and cutting for silage.

Woodward says over the three years the total cumulative dry matter yields were the same for both pasture types. In the summer/autumn there were advantages in feed availability from the mixed pastures, but these were lost in winter.

Indoor and outdoor trials were used to assess milk production and nitrogen partitioning. “When you feed cows indoors in metabolism stalls you can measure the intake of each cow and also collect all the urine and faeces,” Woodward says.

“The cows were fed either mixed or standard pasture. The cows on the mixed pasture ate less but they did produce more milk, and of course that meant more milk solids, not only because of the increase in volume but because we didn’t get a change in the milk fat concentration, but we got an increase in the milk protein concentration.

“But the key reason for using the metabolism stalls was to look at nitrogen partitioning within the cow. This was important from an environmental perspective because we get a feeling of what’s happening in terms of greenhouse gas – that’s your nitrous oxide and ammonia emissions and what’s going to happen in terms of nitrate leaching.”

Cows on the mixed pasture partitioned about 23% of their daily nitrogen intake into the milk, about 39% went into the faeces and 29% went into the urine. Cows on standard diets put a lot less nitrogen (15%) into the milk and much more (43%) into their urine. “And it’s that urine that’s a big problem from an environmental perspective.

“The key point here was the cows fed the mixed diet were excreting only half the amount of nitrogen in the urine than the cows on the standard diet.”

In her summing up Woodward said the biggest finding of the study was that feeding mixed pastures had a major impact on reducing urinary N losses. This was achieved with no loss of milk production and a 15-20% boost in late summer/autumn. She asked farmers to consider what putting a portion of their farm into mixed pasture might mean for their profitability and their ability to reduce nitrogen losses on-farm.

The work was funded by DairyNZ and the Ministry of Business, Innovation and Employment.

Woodward later told Dairy News an application had been made for funding for a much bigger programme of work over the next six years investigating use of various forage species to reduce nitrate leaching. If successful, one aspect will be more indoor work controlling the composition of mixed diet to try to pinpoint which species might have the major effects on production and reducing N loss.

They would also look at the on-farm situation – in the trials so far cows were fed a 100% mixed diet but it was unlikely on-farm that all paddocks would be sown in mixed pasture, which also takes a few years to get established.

So mixed pastures were not the “silver bullet” to reduce nitrogen leaching, but increasing pasture species diversity could certainly provide part of the solution, she believes.