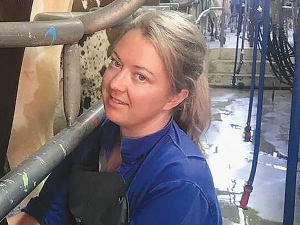 Sophia and her partner Aaron Mills are 50/50 sharemilkers for Bernie and Gaye Hermann at Paengaroa, near Te Puke, where they milk a herd of 550 elite Jersey cows.

Sophia says the herd, which is in the top 1% of herds across all breeds based on breeding worth (BW), is perfectly suited to the farm.

“We are a hilly farm, running a lower input system and milking once-a-day over summer. Jerseys are well suited to our operation and enable us to farm the way we want to farm – not too much time spent on the tractor or too many bells and whistles – just a simple, efficient, profitable system.”

“We have found Jerseys to be a hardy, low maintenance animal. They have good fertility, are easy calving, and with a flatter lactation curve they truck along on once-a-day without stripping condition, even through a dry summer. Our simple system allows us to achieve a work-life balance,” says Sophia.

After graduating from Lincoln with a Bachelor of Commerce and Agriculture, Sophia, who is not from a farming background, went shepherding before spending time overseas.

Upon returning to New Zealand she took a job on a dairy farm near Cambridge, where she met her partner Aaron. It was Sophia’s first taste of milking Jerseys. She says she liked the simplicity of the system with a focus on doing the basics well and achieving profitable production.

When the couple purchased their first herd, comprising crossbred and Jersey animals, they experimented with breed options before breeding the herd back towards Jersey.

“It might be a controversial opinion, but we felt that breeding cross over cross we were getting animals that had the frame of a Jersey but the conformation of a Friesian,” says Sophia.

“We wanted a uniform herd of strong capacious animals with good conformation that would get in calf easily and produce well under a low to medium input  system.”

After sharemilking in Matamata for four years the couple had the opportunity to purchase their dream herd.

“It was a hard decision to make, as we were proud of the herd we had built up, but we had the opportunity to move up in herd size and purchase an elite group of animals with strong indexes and over 60 years of breeding behind them.”

The investment has paid off. The couple have several animals contracted to LIC this season and have found huge demand for their surplus stock.

“This season we sold almost all of our surplus calves. There has been a huge demand for both our surplus Jerseys and also our Jersey Angus, and while calf sales are not our primary focus as dairy farmers, it is a nice bonus.”

They are targeting a six-week in-calf rate of 78% and an empty rate of under 10% from their 10-week mating. The couple doesn’t use any intervention for the herd but says that they’ve always achieved strong submission rates from their Jerseys.

“Jerseys are easy calving and even the slightly larger Jersey Angus calves are no problem. The benefit of that is the cows recover quickly and cycle well pre-mating as we are seeing in our herd,” says Sophia.

“We are really looking forward to getting our first season under our belts, and see what can be achieved with an elite Jersey herd.”