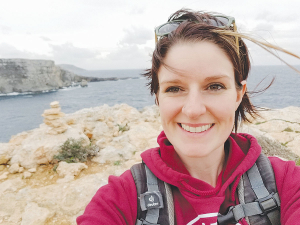 Lead veterinary epidemiologist Dallas New is part of the Ospri team that works on trying to eradicate TB livestock by 2026.

Essentially, epidemiology is the study of disease outbreaks and plays a big part in identifying the source of an outbreak, as well as monitoring and tracking the disease.

Lead veterinary epidemiologist Dallas New is part of the Ospri team that works on trying to eradicate TB livestock by 2026. She likens her work to that of an investigator or disease detective.

Like Covid-19 and the need to track and trace human movements, bovine TB is similar, says Dallas. "With livestock, it's important to mark animal movements so we can track and trace the disease and make sure it doesn't spread that way. Covid-19 has opened up a whole different language that now makes sense to people - most people now know why 'movement control' is so important.

"One reason we care about TB is because it causes disease in people. It's a zoonotic disease, which means it's a type of disease that passes from an animal to a human.

"We get sick if we drink milk from animals with TB, so we need to make sure we're controlling it. We've managed that risk with pasteurisation, but it still remains a trade issue and we want our animals to be happy and healthy."

Dallas believes New Zealand is on track for eradicating the disease from livestock, but possums that carry the disease present a unique challenge.

"New Zealand is a really interesting challenge for TB. In the 1800s, both cattle and possums were imported to New Zealand. Some cattle were infecred with TB, and when the number of possums exploded, bovine TB jumped into possums. This hasn't anywhere else, so that's what makes the TB situation so tricky, we have to get rid of the possums that are spreading the TB.

"In order to kill the possums, Ospri needs to access the land where they preside. In the 1990s, there were close to 1,700 infected herds across New Zealand and there was so much area to cover. If we had trouble accessing one area, we had the option to go somewhere elese. Now that we're down to the remaining 30 to 40 infected herds, we need access to areas that are tougher to reach."

While it's challenging at times, Dallas says the eradication programme has made great strides in the last 30 years.

"My mentor is very well-known in the Irish and Australian TB eradication programmes and he's been consulting on TB since the 1990s. He never thought New Zealand would get to where we are now."

Before arriving in New Zealand in 2019, Dallas was a field veterinary epidemiologist in her home country Canada. Her training and study in Canada saw her travel to the Far North of the country to take on anthrax in bison in northern Ontatio and Avian Flu in British Columbia. Those experiences set her up for success in her new role working on TB in New Zealand.

Following a stint working with DairyNZ as a policy advisor on biosecurity, she began her current role at Ospri in January 2021.

"I was super stocked when this job came up because it's my dream job. My background is in 'One Health' - that's problems that touch on animals, humans and the environment and wildlife - and TB is exactly, that, it's a disease in cows, but to manage it you have to got into wildlife and kill possums to get rid of it, so it's a perfect 'One Health' example.

"Most problems in the world are way more interconnected than we realise. So, when you think of something in the 'One Health' context, it makes you step outside your own expertise, and consider other factors."

Her role as lead epidemiologist means she looks at the disease from a national level and provides guidance for anything that might be out of the ordinary.

"We develop protocols for what testing the vets around the country should do, what movements animals can or can't do and other guidelines in the programme. We help to analyse tricky whole genome sequencing, which gives us clues pointing to the source of infection. We organise research trials to make sure our tests are performing exactly how they should be. Our vets in the regions are at the coal face of bovine TB, and the vet epi team is there to support them and strengthen our eradication programme."