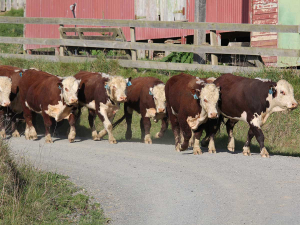 The 2020 May BullsEye bull sale saw an upswing in sales thanks to an online sales platform.

Autumn calving farmers from around New Zealand are expected to attend a service bull sale on the outskirts of Huntly in early May - some in person, but most online.

Two BullsEye sales are held each year - one in May for autumn calving farmers and the second, larger, sale in September for spring calving farms.

BullsEye bull sales are regarded as ‘the place’ to buy top quality Hereford and Angus bulls. The bulls come from renowned studs with years of breeding behind them. Traditionally, the sales attracted a good number of dairy farmers from the upper North Island but, thanks to online bidding, those numbers increased in 2020 thanks to MyLivestock, an online hybrid auction platform.

“It opened up livestock trading to farmers, no matter where they live. Where before farmers often only attended local sales, now they’re able to virtually attend and bid at livestock sales around New Zealand.”

“The ability to buy livestock from the farm office is a huge advantage. They are able to scan a range of auctions, decide on the class of stock they’re interested in, and bid in real time – without leaving the farm.

“Farmers are busy people and to go to a sale to buy maybe just 4 or 5 bulls can take a fair chunk of the day, but with the online system they can sit in front of their computer for half an hour and buy then get straight back to work on the farm; it can’t be easier than that.”

Sweeney said around 230 two and three year old bulls will come forward at the May BullsEye Sale.

“I have personally inspected these bulls and they come forward in excellent condition. The Herefords are very well marked and all the bulls have exceptional temperament – which is one of the biggest factors for dairy farmers. Service bulls are a given on many dairy farms but they introduce a new dynamic – one capable of breaking fences and going through gates. The bulls that vendors David and Fiona MacKenzie are bringing forward are quiet, used to being handled and will fit in well on any dairy farm.

“All bulls are health tested for M.bovis, TB and double inoculated for BVD.

“David and Fiona MacKenzie stand behind their bulls and if there is an issue with a bull before or on delivery, the bull can be replaced or fully refunded.

“Another significant advantage for farmers buying bulls at the sale is that they have until 21 June to take delivery – the vendors providing free grazing for the intervening weeks.”

Sweeney said the line of bulls on offer “will satisfy farmer demand whether that be based on breed (ie Jersey, or Holstein Friesian), easy-calving or bulls which will leave calves which are clearly differentiated from replacements.

Full details of the sale can be found on www.mylivestock.co.nz.