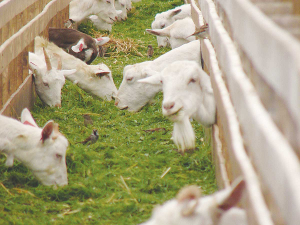 Goats are at risk from the moment they start to eat grass.

Worms are probably the biggest health problem for goat farmers.

They don't develop age-related immaturity as sheep and cattle do, so they remain susceptible throughout their lives, especially if they are stressed for long periods by underfeeding, or cold wet weather, or another disease like Johne's disease.

Goats are at risk from the moment they start to eat grass, and growing kids and weak goats are particularly susceptible.

The problem of worm control is complicated in dairy goats by the fact that many anthelmintics remain in the meat and milk for some time after treatment. For this reason, milk from does treated with treated with worm treatments (anthelmintics) shouldn't be used for human consumption until the 'with-holding period' has elapsed.

To some extent worms can exist with their hosts causing no problems, but as numbers build up they damage the intestine lining causing fluid and protein loss. The earliest effects, a drop in milk production or a reduction of growth rates can be subtle (subclinical). With increasing numbers the signs become more obvious (clinical). The clinical signs of parasitism are ill-thrift, weight loss, diarrhoea and even deaths.

The stomach worm Haemonchus can be particularly nasty in dairy goats. It causes scouring, anaemia (pale mucous membranes), weakness (because of internal blood loss), and sometimes bottle jaw (swelling under the jaw because of low protein levels in the blood). It occurs in goats in the northern half of the North Island.

Drench resistance means that some or all of the worms in the goats are not being removed by the drench used.

Once you have drench resistant worms in pasture and in livestock on your farm, it is very difficult or impossible to get rid of them, and you must change to an effective drench.

To maintain good worm control it is wise to test for drench effectiveness from time to time.

About 80% of milking goat herds may already have drench-resistant worms on their pasture and in their goats. On some goat farms, resistance to all three drench families has been recorded.

Delay the onset of drench resistance by avoiding excessive or unnecessary drenching. Try to make the interval between drenches as long as possible, using faecal egg counts to give you confidence. The longer the gap, the lower the risk of selecting for resistance worms. Drenching at less than 28-day intervals increases the risk of developing resistance.

Don't under-dose. If you can't weight individual goats, base the dose volume on the heaviest animal in the mob. If there is a wide amount of variation in body weight, split onto smaller groups and dose to the heaviest in each group.

The latest thinking with sheep is that it's okay to leave the healthiest animals in a mob undrenched. This helps to maintain a reservoir of 'susceptible' worms in the population to dilute down any resistant worms. This might be appropriate on your goat farm, but before you leave the most robust goats undrenched, talk to your vet about the pros and cons.

Shelter is one of the first considerations when contemplating the purchase of a doe, according to the New Zealand Dairy Goat Breeders Association.

The Australian dairy goat industry is relatively small, but there is an increasing consumer demand for healthy and exotic dairy products.