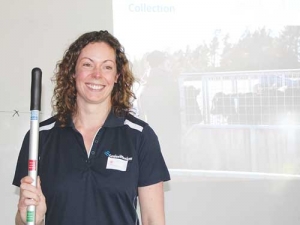 She told the first North Island workshop in Ngatea that adding an EasiYo sachet to colostrum – one packet for 20L of colostrum – or adding yoghurt from the supermarket, provided it contains acidophilus bacteria, is a good way of keeping colostrum for longer. The first ‘batch’ can be used to seed the next batch of colostrum and so on. The good bacteria will grow and the environment will discourage the bad bacteria.

“You want colostrum to be completely consistent so the calves are getting all the same amount at the same time. We don’t want it separating out.”

Freezing is another storage method but you have to be careful how you defrost it, Morgan says. “Proteins have a specific structure as do the immunoglobulins in colostrum. If you microwave colostrum to defrost it, the protein becomes solid and is not available to the calf.”

The chill needs to be taken off so calves do not use energy to bring it up to body temperature. Older calves are fine with cold milk.

The timing and amount of colostrum is important, Morgan says. The best time to get colostrum into calves is the six hours after they are born. If possible it is best to collect calves twice a day from the paddock, otherwise some will not get colostrum until after 24 hours.

“Twenty four hours is when colostrum absorption starts to reduce and is not as effective. DairyNZ research shows 56% of calves don’t get colostrum from their mothers.”

Morgan says she is happy with tube feeding if the alternative is no colostrum. “In an ideal world everyone will bottle feed their calves. But it can mean some calves won’t get colostrum or someone is so stressed that the calves won’t suck.”

Moving on to milk, Morgan says milk out of the vat versus calf milk replacer is an easy comparison this year. Milk out of the vat will be the more economical. A payout of about $6kg/MS is the breakeven point and at that stage it is worth doing a comparison between the two. “You should look at milk powder if you have some disease on farm and you don’t want it passed onto the calves. Milk powder is sterile and a good way of getting vitamins and minerals into the calves.”

The aim of calf feeding is to improve and grow the rumen and to ensure  the mature cow can take all the nutrients out of the pasture and foliage she is fed.

“It is a huge fermentation vat with millions of microbes,” she says. The rumen needs a good surface area and developed muscles.

When a calf is born the rumen will be one flat plain muscular structure. The aim is to grow rumen papillae (finger-like protrusions). Papillae grow by feeding starches and sugars to the calves. Starches come from grains like wheat, maize and barley and sugars come from things like molasses.

“If we just feed milk the rumen won’t develop because milk doesn’t go into the rumen so it doesn’t affect rumen development. The calves will grow well because they are adapted for the milk.  But if we only feed milk and wean onto grass they will have a massive growth check because the rumen isn’t developed enough to take the nutrients out of the pasture.”

Feeding only hay and milk will not grow the papillae but it will cause the muscles to develop. Sometimes papillae grow too quickly and they stick together; fibre sources help split them apart.

“We want slowly absorbed starches because too much sugar will break down too quickly and the microbes can’t absorb it and you can end up with acidosis.” Molasses is fine but it must be limited.

She suggests putting meal in the pen from day one to get them used to it and eating a little. Pellets and meal are both suitable for young calves.

Calf meal needs to be high in energy; look at the specifications. You want 13% ME for small calves and a bit more for older calves. That should come from grains like maize, wheat or barley. Energy should not be obtained through biscuit meal, lolly waste or similar. “We don’t want too much fat or fast energy. A consistent diet is necessary.”

Morgan says the amount of milk and frequency is one of the most contentious subjects. Some people do once-a-day from day one others think that is cruel.

And if calves aren’t eating meal it probably is because there’s too much milk. “You can look at scaling back after about three weeks.” For those on twice-a-day who are considering when to go to once-a-day, three weeks is the best timing.

The right feed should have: