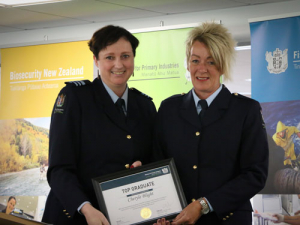 A cohort of 27 new NAIT compliance officers have graduated and will begin working with farmers.

The officers graduated from their training programme on Friday.

The new officers are part of a greater effort to educate farmers about their NAIT obligations, and enforce compliance with the scheme.

“The new officers will be located throughout the country helping farmers use NAIT consistently and taking action when non-compliance is detected,” say animal welfare and NAIT compliance manager, Gray Harrison.

Harrison says there has been a steady increase in the number of animal movements recorded through NAIT.

“We’re pleased to see there has been an almost 20% increase in the number of animal movements recorded this year compared to the same period in 2017.

“It is essential all farmers, including lifestylers, register their cattle and deer in NAIT and record all animal movements.

“A well-functioning NAIT scheme is a vital part of our national biosecurity system as it helps MPI respond to and manage animal diseases, such as Mycoplasma bovis.”

Harrison says that changes are being made by MPI and OSPRI to improve the scheme and ensure it is fit for the future.

“It is important farmers know that OSPRI is there to help if they have any questions or concerns about their NAIT account. They’ve got experienced staff on hand who know how to use the system and want to help.”

“MPI is currently consulting the public on potential changes to the NAIT Act and regulations to improve the scheme.”

Farmers have until 19 December to have their say on MPI’s proposed law changes. More information about the consultation is available on the MPI website, here: www.mpi.govt.nz/NAITconsultation

OSPRI is making operational changes to improve the scheme, including making the system faster and easier to use.