A2 profit surges on Chinese demand 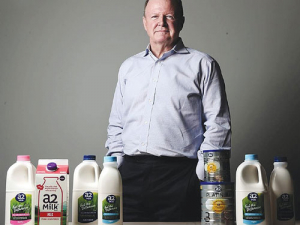 A2 Milk's after-tax profit of $90.6 million is 198% ahead of last year on surging Chinese demand.

The company reported continued strong growth in sales and market share for a2 Platinum infant formula in Australia and China and sales growth of a2 Milk branded fresh milk and milk powders in Australia.

“The company made further strong gains in revenue and earnings in the 2017 financial year (FY17), with outstanding performance in infant formula and continued growth in liquid milk in each of its core markets,” says its annual results statement.

Sales of a2 Platinum infant formula continued to grow strongly in Australia and China in online and offline channels, consistent with growing brand awareness among consumers in both countries.

Infant formula generated 72% of total revenue for the year, up from 61% in the 2016 financial year.

The company is focused on growth of a2 Platinum infant formula through investment in product supply and quality, building brand awareness and strength, and meeting the requirements of China’s regulatory regime.

Managing director Geoffrey Babidge says: “The company’s continued growth reflects increasing consumer acceptance of the a2 brand and the benefits of dairy-based products free from the A1 beta casein protein type.

“We have continued to support and expand our brand proposition through effective marketing and promotional activities in each of our markets. Our support for relevant scientific research and continued investment in intellectual property are also key aspects of this strategy.

“It is particularly pleasing that we have been able to respond progressively to the supply challenges arising from growth in demand for a2 Platinum infant formula over the year which exceeded our previous expectations.

“A key element in fulfilling the growing demand is the renewed long-term supply agreement with our manufacturing partner Synlait. We have also been successful in adapting to shifts in demand for infant formula between the major retail, e-commerce and personal shopper (‘daigou’) channels, recognising this is an important dynamic for continuing growth.

“The company is also strongly focused on China’s evolving regulatory regime, in particular the requirement for registration of infant formula brands by China’s Food and Drug Administration from January 2018.

“The company has a number of initiatives under way to progress portfolio growth in nutritional products and to extend its business into emerging markets, without loss of focus on current initiatives.

“With a strong cash position and no debt the company is in a robust position to continue the implementation of its growth strategy.”

The closing cash on hand of $121m was after an investment of $48.7m in shares in Synlait Milk Ltd.

Further progress was made in building the US business, with a continued focus on California and expansion to the southeast through a premier retailer in that region and in the natural grocery channels.

Fresh milk sales in the UK showed strong growth on the previous year with continued marketing investment and improved customer engagement, delivering operating profits for the first time. Expanded distribution was also achieved with a number of retailers by year-end.

Fonterra keen for a slice of A2

The a2 Milk Company and Fonterra are working closely through “the next wave of commercial opportunities together”.

a2 Milk Co only scratching the surface

This year was pivotal in the “transformative dynamic” of a2 Milk Company and it had “really only just scratched the surface” of its potential as a business, chief executive Jayne Hrdlicka says.