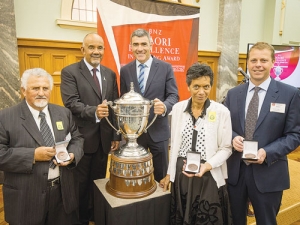 It's the first time in the history of the competition that two South Island finalists have emerged.

The three are Ngai Tahu Farming Ltd, whose farms are located near Oxford, in Canterbury; Tewi Trust, located at Okoroire, near Tirau, South Waikato; and Rakaia Incorporation's Tahu a Tao farm near Ashburton.

The three finalists were announced by the Minister for Maori Development Te Ururoa Flavell at a function attended by 100 people at parliament last week.

Meanwhile the Minister for Primary Industries, Nathan Guy, said at the function this was a nice bit of positive news for the dairy sector. He says it's exciting to see businesses such as the three finalists performing well at a time when global dairy prices are putting pressure on farmers.

"This dairy downturn has refocused our farmers on growing grass, harvesting grass efficiently and working on the bottom line. We have to focus on the basics. In my view we will get through this period of volatility."

Guy says it great to see Maori agribusiness performing so well and growing its asset base. He says a lot of work is being done by MPI to get Maori trusts to work together for economies of scale.

Meanwhile Kingi Smiler, the chairman of the Ahuwhenua Trophy management committee, applauds the three farms' big brave call to showcase their operations in challenging times, their leaders emerging and showing the way for others.

Smiler says there is no denying that the dairy industry is going through difficult times, with international factors beyond its control.

"But this is not a time to retreat until the better times return."