Another election on the cards? 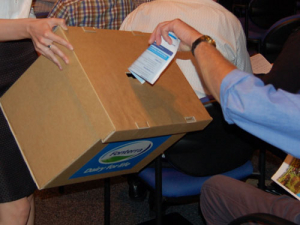 It's possible that Fonterra’s board election could deliver a hung result this week – with voting closing at 10:30 am on Tuesday November 6.

The co-op’s revised director election process, implemented last year, requires farmers to vote ‘yes’ or ‘no’ against each candidate.

If three candidates fail to achieve the 50% ‘yes’ vote threshold, another director election could be on the cards.

Online voting requires farmers to cast a vote against each candidate; a maximum of three yes votes. Online voting won’t register unless farmers have used one, two or three of their yes votes, and all remaining no votes.

To win, a candidate must get more than 50% of those voting for him or her, so ‘no’ votes are as essential as well as ‘yes’ votes.

Because there are five candidates for three places, it is possible none, one, two or three could get elected.

Fonterra Shareholders Council chairman Duncan Coull told Rural News he wouldn’t speculate on the results as voting was on.

“If we fail to elect three directors, then the council will run another election.”

Last year, when Fonterra used the new director voting system for the first time, but there were only three candidates for three vacant director seats. All three candidates – chairman John Monaghan, Brent Goldsack and Andy Macfarlane – got over the 50% threshold.

Nicholls and former director Guiney self-nominated for the election.

A Fonterra farmer told Rural News it seems the council never expected anyone to stand outside the panel process or thought through the implications.

“Farmers have already worked it out and are voting strategically.”

Another board election, apart from the financial cost – will also restrict some candidates from re-running. Under the rules, the three candidates who came through the independent selection panel process are ineligible to stand again for 12-months. There is no such restriction for self-nominated candidates.

The farmer told Rural News there is also confusion around the Fonterra director election protocol.

“That’s incredible for an election; throwing up all sorts of interesting combinations and permutations.”

Fonterra has 11 directors; seven farmer-elected and four independent directors appointed by the board.

Meanwhile, Fonterra board aspirant Peter McBride is stepping down as Zespri chairman in February next year. He will retire from Zespri board at the annual meeting in July 2019.

McBride has been touted as a possible future chairman of Fonterra.