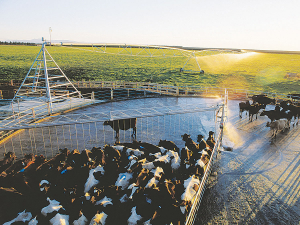 A new record milk price for this season has been forecast as dairy products fetch higher on the back of strong demand and softening supply.

ASB has responded to last week's Global Dairy Trade (GDT) price rise by bumping up its forecast milk price for 2021-22 season by 55c to $8.75/kgMS.

If this forecast comes to pass, it will smash the record milk price of $8.40/kgMS set eight seasons ago.

ASB economist Nat Keall says GDT events over the first half of spring have shown no sign of demand softening.

And with supply continuing to look tight, ASB is comfortable making a sizeable upward revision, he adds.

He says Fonterra should also be around 80%+ hedged by this point in the season.

This means the co-operative could wind up with an effective exchange rate just north of the US$0.69 mark - a favourable exchange rate considering where NZ commodity prices are.

Keall cautions that there's still a lot of uncertainty - commodity markets have been particularly volatile over 2021 thus far.

"Still, the trends over the beginning of spring suggest that the possibility a record farmgate milk price for the season is very much alive," he says.

Benchmark whole milk powder (WMP) prices lifted by 1.5% cementing global dairy prices at very healthy levels. WMP prices have lifted a combined 6.7% over September and October, and now sit 25% above year ago levels. Taking a longer-term perspective, prices are around 20% above their five-year average.

But Keall points out that it's not the headline moves that are key.

"The real story is that forward contracts point to prices maintaining momentum well into the latter half of the season.

"The GDT contract curve developed a sharpish downward slope over the winter, but spring developments have seen the curve flatten over the past few quarters with prices stabilising in a healthy US$3,700-3,900/MT range.

"There will be further movement into summer, but the implication is that buyers expect supply to remain tight moving into the latter half of the season.

"On that note, it looks increasingly likely production will undershoot the expectations most of us held earlier in the year."

Milk production in key dairy producing markets, including New Zealand, is down.

With steady demand, this is putting upward pressure on prices.

New Zealand dairy production over August was down 4.2% compared to August 2020.

"In addition, anecdotes suggest that this production weakness has continued through September and into October," he says.

Westpac is forecasting a milk price of $8.50/kgMS.

"All up, the solid result and outlook reinforces our 2021-22 farmgate milk price forecast," he says.