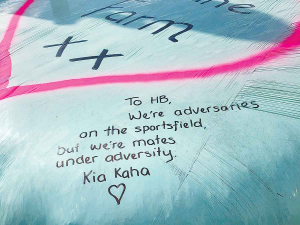 With the drought reaching a crisis level in Central Hawkes Bay with supplementary feed almost non-existent, farmers in the Wairarapa have answered the call for help.

Farmers Sophie and Dan Hansen got working on social media and by Monday last week more than 720 bales of baleage had been shipped to Hawkes Bay.

One of those who donated feed was Karen Williams who’s the chairperson of Federated Farmers Arable section. She and her husband have a mixed cropping and sheep and beef finishing operation near the town of Gladstone.

They gave five bales and also a tonne of grain. She says the social media response was great and people who donated bales wrote messages on them to the farmers who would eventually receive the feed.

“It’s just what we do in rural communities. When you see someone struggling you give generously to your country cousins. The combination of COVID and drought has been very tough for people and that’s why we look after each other. It’s about sharing the love,” she says.