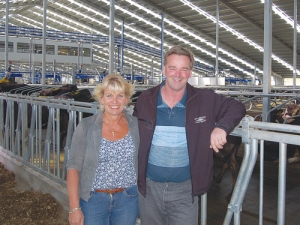 The owners of one of New Zealand's largest dairy operations, the Van Leeuwen Dairy Group, say the operation is alive and well.

Adriaan and Wilma van Leeuwen told Dairy News by email from overseas that the South Canterbury business is not in receivership, as rumoured.

They also had heard this rumour, on RNZ National radio, but say it is "false". The group has 12 holdings and 12,000 dairy cows, and is the world's largest robotic milking farm. Last year it expanded by installing 24 Lely robots in three barns of 500 cows each.

Adriaan and Wilma also made the Rich List last year with wealth estimated at $65 million.

THE OWNERS of the world’s largest robotic farm under one roof, Aad and Wilma van Leeuwen, say they were particularly attracted to the DeLaval robotic milkers due to the Herd Navigator technology.

Putting the machine into milking in south Canterbury

THE WORLD’S largest robotic dairy farm under one roof has swung into operation in South Canterbury.