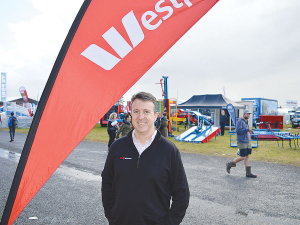 Westpac's Nathan Penny says the milk price is getting towards the upper limit of what Fonterra can pay.

Rampant dairy prices may force Fonterra to cap its farm-gate milk price for this season, according to Westpac senior agri economist Nathan Penny.

He believes an $8.50/kgMS milk price "is getting towards the upper limit of what Fonterra can pay".

Fonterra also has a substantial consumer business and raw milk is part of the cost of production for consumer products.

Penny says the higher the milk price the harder it becomes for Fonterra's consumer businesses.

"In that sense, Fonterra could cap the milk price to prevent losses in these other businesses." he says.

He also points out that Fonterra has limited processing capacity for its various products.

"In 2013/14 for example, we saw that Fonterra was constrained in product mix choices and therefore not fully able to take advantage of very high whole milk powder prices over that season."

Fonterra last month narrowed its forecast farm-gate milk price range to $7.25 to $8.25, with a mid-point of $8/kgMS and issued an earnings guidance of 25-40c/share for its value added business.

"While the increase in milk price can put pressure on our input costs, we remain comfortable with our current 2021/22 earnings guidance range of 25-40c/share.

"Regarding processing capacity, as we move through peak milk production months we get more flexibility, which in turn aids product mix decisions," says Turner.

Whole milk powder prices rose 2.7%, its fourth increase in the last five auctions. The jump in prices builds on gains over September and October.

Overall, WMP prices have lifted 10% since August and sit 30% or more above year ago levels.

Penny notes that taking a longer-term perspective, prices are around 20% above their five year average.

New Zealand dairy production over September was down 4% compared to September 2020.

"The GDT price index is still gaining at a time when it's already circa 25% above the long-run average," he says.

Keall says that while production outlook is improving somewhat, demand is robust.

"NZ spring production got off to a slow start, underpinned by mixed pasture growing conditions - cold, wet and relatively low light," he says.

However, climatic conditions and grass growth for the next two months look positive.

"This suggests that production should be positive over November and December," he says.

But Keall says securing product remains a focus for buyers.

"All WMP contracts gained ground at this auction, but the larger gains were for the latter-dated contracts, indicating buyers are still prepared to pay a premium to secure product well into the latter part of the season - and it's not just the Chinese buyers.

"The WMP futures market doesn't expect to see prices moderate much for the remainder of the season, hovering near US$3,900/MT."

Keall remains happy with their record $8.75/kgMS forecast for the season.

"Even with a gradual ramping up in production, we expect the global dairy demand and supply balance over the remainder of the season will remain favourable for producers."