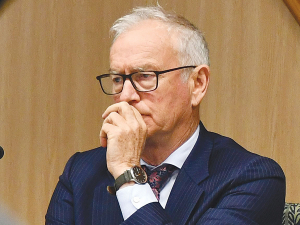 “I’ve always had a clear view that… we’ve got some regulatory responsibilities but actually we are focused on improving outcomes, we can’t do that without a good relationship with farmers,” Phillips told Dairy News after announcing that he will retire from the role in May.

That relationship hasn’t been without its tensions with some farmers, he says, but overall it’s been a positive one.

“I think if you look at some of the things we’ve done, we’ve changed our compliance activities, putting some emphasis on shed talks and those types of things.”

Phillips says he believes education has played a ‘real part’ in the relationship between ES and farmers.

“We’re also making sure that staff work with farmers and other consent holders to understand their consent conditions when they’re applying for things,” he says.

“If you look at what we’re doing around intensive winter grazing – our rural community and the region has done really well in terms of changing our wintering practices, and that’s happened really quickly,” he says.

The winter grazing regulations came into effect in Southland almost three years ago in May 2019.

“We’ve seen a real significant shift in improvement and that’s through us working with industry and farmer groups to do that.

“That hasn’t happened on its own,” he says, adding that there is still work to be done.

“I’m not saying we’re relaxed because we’ve got another winter coming up.”

Phillips also highlights the efforts made by ES and landowners around Velvetleaf in 2016.

“We worked initially with MPI [Ministry for Primary Industries] but then on our own with farmer groups… to actually get out there and inspect the paddocks effected and we actually spent a lot of money and a lot of time doing that, and that was a really collaborative effort.”

He says the region has been “really lucky” because the hard work that went into those biosecurity efforts have paid off.

“We have really low reinfestation here, we’re not seeing much Velvetleaf at all which is pretty amazing.”

He says another key relationship for ES has been with Rural Support Trusts in the region.

“That was the biggest flood we’ve ever had on record. Our stock banks stood the test of time and largely kept the water in, but we had Rural Support Trust on site.

“We worked closely with them through that process as they worked with farmers, they got a sense of the things we were working on so that was an excellent effort,” he says.

Phillips will end his 10-year tenure as chief executive in May 2022 but will continue with his governance roles, including as co-chair of the Bio- Heritage Challenge and as ES’s appointed representative on the board of Predator Free Rakiura.