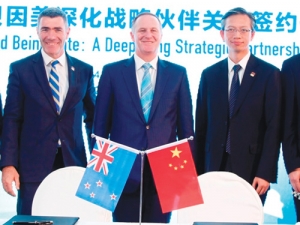 The minister for Primary Industries, Nathan Guy, spoke to the Chinese Minister of Agriculture in Beijing last week.

Guy was trying to discover when the glut of dairy products there will end.

He spoke to Dairy News while visiting Beijing in a large trade delegation led by Prime Minister John Key; it included representatives of about 40 New Zealand companies, including most dairy companies.

Guy says he realises that NZ farmers are suffering because of what he calls a "congested market in China" and says he hopes the situation will gradually improve. One problem is that some of the EU milk formerly made into butter for Russia is now going to China.

"It's a bit early to say how long it will take to get a correction of the demand and supply imbalance. Demand has still been growing in China at about 2% which is important but unfortunately supply is exceeding that growth. It is going to take time for that correction to take place, but I am still optimistic that next year will be better than this year."

Guy says he and Key spoke to their Chinese counterparts on the present NZ/China Free Trade Agreement (FTA). They are hoping for an earlier lifting of 'safeguard clauses' in the FTA. At present, once the amount of tariff free product entering China reaches a certain threshold, the tariffs kick in again. These are due to be completely lifted by 2020-2022, but NZ wants them lifted sooner and aligned with Australia which has a better deal in this regard with China. Guy says this is an issue of fairness.

Guy says an exciting development on the trade mission was NZ signing a memorandum of understanding with the world's largest online sales platform Alibaba. The aim is closer cooperation between Alibaba and NZ exporters.

"They have 407 million active buyers on-line in China and they want to see more NZ products on their platform -- an exciting opportunity," he says.

China is a challenging market and any new exporter needs to go in with eyes open and be aware of the Chinese culture and how this plays out in any business deal, Guy says.

But despite the challenges there is also good news. Cancelling the one-child policy has caused a baby boom -- 38 children born every minute -- and that has positive implications for NZ.

"The average spending power of a middle class Chinese consumer has doubled from $16,000 in 2010 to $32,000 last year. There are 300 million middle class consumers, likely to grow by a further 150 million in ten years. This makes me confident about the Chinese market in the long term," he says.