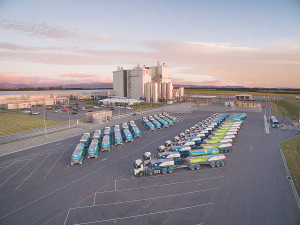 Fonterra says work done to improve its balance sheet over the last few years is paying off.

This month Fitch Ratings revised the co-operative’s outlook to stable from negative and reaffirmed its ‘A’ rating.

“In particular, the work we’ve done to improve our balance sheet over the last few years,” he says.

“This has helped the co-operative retain its defensive traits, which previously underpinned the rating.

“Fonterra can pass on global dairy-price and foreign-exchange movements to farmers in its global ingredient business, and benefits from resilient profit margins in the consumer and food-service business when dairy prices are low. These reduce profit volatility and maintain its leverage metrics.”

Fonterra has been divesting non-core foreign assets and implemented a number of cost-cutting measures in its core business to address its profit volatility.

In 2019, it sold iconic ice cream maker Tip Top to Froneri, a joint venture between Nestle and PAI Partners for $380 million. Last year it offloaded stakes in DFE Pharma and Foodspring for $623 million.

This financial year the co-op hopes to complete the sale of China Farms for $555m.

Fitch notes that Fonterra’s completed asset sales are in line with its target to reduce gross debt by $1 billion.

As a result, leverage declined to 1.7x in financial year 2020 (FY19: 2.2x) and Fitch expects leverage to remain around this level over the medium term.

Fitch has not included any potential divestments in its base case but notes that Fonterra continues to sell off its stake in Beingmate, while DPA Brazil remains under strategic review and may also be sold.

But Fitch expects the impact on Fonterra’s core ingredient business to be limited, as global dairy sales remain resilient.

“Fonterra’s consumer and food-service division may, however, recover slowly, as the hospitality sector across many markets remains dampened by the restrictions to manage the pandemic,” it says.

On farm debt, Fitch says it expects farm leverage, measured by the level of borrowings by farmers/milk-solids production, to remain above the historical average over the next few years.

“However, farmers are likely to continue being able to service debt, helped by industry bodies, which have worked with the farmers to achieve cost savings, as well as the sustained recovery of global dairy prices from their record lows in FY16,” it says.

Fonterra is owned by 10,000 farmer shareholders.