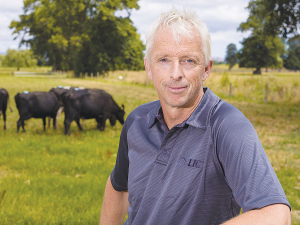 The co-operative's genomic evaluation service screens an animal's DNA to find out what genes it received from its parents. This provides a more accurate prediction of its expected performance in the milking herd, helping farmers better select their top cows to breed from and increase the rate of genetic gain on farm.

"As New Zealand's cow population containers to reduce, Kiwi farmers are focused on improving the quality and efficiency of their herd. Breeding the best quality heifer (female) calves from the highest genetic merit cows plays a critical role in achieving that."

Spelman says this service allows farmers to get a look into the future and identify their herds' superior performance when they're young calves.

"Traditionally, farmers have to wait a few years until their heifers are milking and have had a couple of herd tests to get a reliable understanding of their performance.

"By drawing on information from an animal's DNA we're able to fasttrack that process and provide farmers with an early indication of their highest genetic merit animals so they can make a concerted effort to breed replacements from them."

Spelman says without genomic evaluation, a parent average is used to predict a calf's performance.

"A parent average isn't the most reliable prediction because it's based on the offspring inheriting an average set of genes from each parent. In reality, they'll have a random mixture of genes from both parents - some will be better and some will be worse.

"Including a calf's DNA in its evaluation provides a much clearer understanding of which genes it's acquired from its mum and dad so we can better predict how well it's going to perform. For a dairy cow, performance is measured by how efficient it is at converting feed into profit."

Spelman says the co-op's 30-year investment to develop and fine-tune genomic science, along with its recent purchase of advanced DNA technology, means it's now able to offer this service to farmers.

"LIC has made a significant investment into genomics because we passionately believe in its power to enhance herd improvement. We see the value our genomics investment is delivering to farmers through our high BW bull teams and we're excited to provide shareholders additional value from our investment through this new service," says Spelman.