Down to the sea in barges 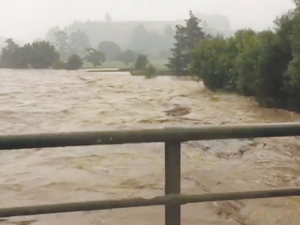 A swollen Takaka River at the height of last week’s storm.

Severe damage to the Takaka Hill road from ex-cyclone Gita is forcing Fonterra to barge product by sea from its Takaka factory.

Golden Bay, at the top of the South Island, was among the regions hardest hit by the storm, which washed out roads and bridges, inundated farmland and sent ‘a wall of water’ down the Takaka River.

Worst was damage to the Takaka Hill road, the only land access between the district and the rest of the country. Early estimates were that it could remain closed for at least several days.

Fonterra’s operations manager for the upper South Island, Chris Win, said a barge organised with Civil Defence would initially bring in an empty tanker and trucks for Fonterra and supplies for residents and visitors. The barge would ferry goods back and forth to Nelson for as long as necessary.

Golden Bay has 83 dairy farms suppling Fonterra’s factory at Takaka, which can process about 525,000L a day into skim milk powder. It also produces cream as a by-product which is normally tankered out for further processing at Clandeboye. With limited storage at the factory, both would be barged out as necessary.

Win said a power outage at Takaka lasted only about two and half hours but a boiler had to be shut down and restarted, losing several hours production.

At the height of the storm about half the district’s farms were not collected from for safety reasons but all but about three were reached the next day.

Takaka farmer Corrigan Sowman said the storm brought “probably a 100-year flood” in the Takaka River, which bounds his farm.

“In fact I don’t think they’ve recorded 980 cubes (cu.m/sec) at Upper Takaka before. But in terms of damage, when I look around our property this morning it wouldn’t be any more than a typical 10-year event. We got a few broken wires.”

Sowman believed the district’s farmers were “pretty well organised” before the storm, so stock were all well out of the flood path.

“The alarming thing last night was the sheer rate that the river came up; it was literally a wall of water.”

“Electric power remains on at the Hokitika site and all milk collected has been processed,” said Westland Milk Products chief executive Toni Brendish.

A state of emergency was declared by all three district councils in Westland’s primary catchment area (Buller, Grey and Westland) and some localised road closures prevented tanker access to some farms, but most roads were open, she said.

A state of emergency was also declared in Christchurch and Selwyn districts but there was no impact on Westland’s plant at Rolleston or access to its Canterbury suppliers.

Brendish said media reports of Westland Milk tankers being “stranded” at Hari Hari were incorrect. They were queued at Hari Hari waiting to see if they could get further south but were never cut off. Once advised the road was not going to be open in time, they collected milk locally then returned to Hokitika.

Westport cops another one

Westport was again in the firing line as cyclone Gita unleashed itself along the West Coast.

Rebecca Keoghan, Landcorp, who runs several dairy farms at Cape Foulwind near Westport says they prepared for Gita by tying down anything that might have blown away.

But they still lost small sheds and a few trees.

“The biggest gust we recorded was 123km/h before the wind blew the weather station away. We had big tides but they weren’t as bad as the previous cyclone.”

Keoghan says they also lost power, but that didn’t affect their once-a-day milking; they had already milked the cows before cyclone Gita struck just after lunchtime. If they were not on OAD the high winds would have prevented their afternoon milking.

“It would have been too dangerous,” she says.

OAD gave them leeway and helped them prepare for the storm and get though it reasonably well.

“It’s been a couple of big weeks. We are over these storms now and they can stop,” she says.