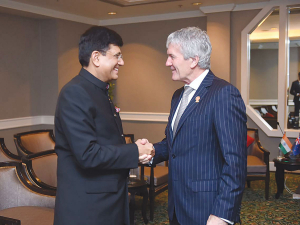 “This is half the world’s population, so while we may be big exporters we are 2% of global dairy production, so the potential for us to place high value dairy products into at least 15 other countries is huge,” O’Connor told Dairy News.

O’Connor was in the Philippines last week for RCEP negotiations and he also attended the East Asia Summit and the ASEAN Economic Ministers meetings.

One of the meetings he held with other government counterparts included “a very positive financial meeting” with Indian Commerce Minister Piyush Goyal.

“A lot of good work on a financial basis is occurring between New Zealand and India,” O’Connor said. “We are assisting Indian apple growers in the north of India and there are connections with the dairy industry.

“But as a country with the biggest dairy industry in the world India is very mindful of our focus on exports of dairy into their market. It is a very sensitive issue for them.

“It is very important we emphasise the size of our industry relative to theirs, and that we would only be putting into their market high value products which would assist their dairy industry to innovate.”

“A joint venture in dairy processing might have potential. We are committed to investigate many possibilities of cooperation.”

In countries with strong growth, RCEP opens the door also to huge opportunities in services and e-commerce.

RCEP is building momentum towards an agreed target of the end of 2019 for conclusion and 2020 for signing, says O’Connor.

“All countries are actively engaged and finalising some of the details on the bilateral issues. Obviously there are still some issues to be resolved between some of the major players but everyone is committed to attempting to complete this deal by the end of the year.

“There will be outstanding issues that will be put to one side. But a substantive agreement will be a huge step for international trade if we can do this.”

Ministers provide the mandate for negotiators to follow through.

Maintaining strong relationships with all countries is really important at a time of such uncertainty in Europe, UK and the US, says O’Connor.

“We have a reputation for being honest, fair and upfront. It is important that we continue at these forums to do that.”

O’Connor also attended the East Asia summit which included representatives from Russia, US and officials and ministers from countries around the world.

“Every meeting is valuable and keeps New Zealand front of mind for our trading partners and from a diplomatic perspective as well.”