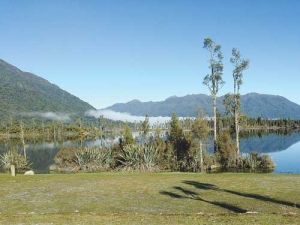 West Coast farmers have spent at least $8 million on conservation efforts to improve the water quality of Lake Brunner.

DairyNZ and NZ Landcare Trust surveyed half the 22 dairy farmers in the lake's catchment, finding they had spent $4.7 million on clean-up initiatives.

DairyNZ environment manager Dr Mike Scarsbrook says the farmers' achievements are impressive and reflect their commitment to preserving the environment.

"Based on our survey, we estimate that in total farmers have probably spent closer to $8-9 million on improvements," he says.

To date 70km of the streams flowing into Lake Brunner have been fenced off and 21,000 new plants have been added to banks to help prevent sediment from entering waterways. On top of this, 76ha of land has been retired by farmers.

"With each hectare valued at around $20,000 this amounts to a significant investment," says Scarsbrook.

The lake, 37km southeast of Greymouth, is the largest lake on the West Coast and a popular recreation and tourism hub.

Over the last 10 years, dairy farmers have undertaken a series of projects in collaboration with a number of organisations including West Coast Regional Council, Westland Milk Products, DairyNZ, AgResearch, NIWA, and NZ Landcare Trust.

Katie Milne, a national board member of Federated Farmers, helped set up the Lake Brunner Catchment Care Group in 2012. The catchment initially received $200,000 of funding from the Ministry for the Environment which was used for riparian planting, waterway fencing and restoration works.

"In the first round of action, farmers took on projects such building bridges for cattle crossings, introducing culverts, upgrading effluent systems and fencing off waterways. Many of these actions were voluntary which came at a cost to farmers," says Milne.

"The catchment is characterised by extremely high rainfall of around five metres or more a year.

"This poses a significant challenge when keeping farm run-off from entering waterways. Farmers in the catchment have been working together to identify what changes they can make on farm to reduce nutrient inputs to the lake," says Shirley.

The catchment group is mapping out future plans for the protection of Lake Brunner. Further work is planned over the next five years which will broaden the scope of existing projects.