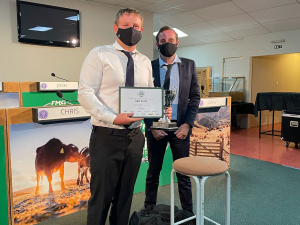 Waikato/Bay of Plenty's Chris Poole will compete in the FMG Young Farmer of the Year grand final in July.

For Waikato/Bay of Plenty’s Chris Poole, age 27, the competition is something of a family affair as his wife, Emma Dangen, was an FMG Young Farmer of the Year Grand Finalist in 2019.

Poole will also be competing against his brother-in-law, Tim Dangen, a sheep/beef farmer, in the 2022 Grand Final.

Tasman’s Jonny Brown manages a dairy farm for Dairy Holdings Ltd, which milks 1,300 cows, and has spent his career rising through the ranks of the industry.

Since graduating from Lincoln University with a Bachelor of Agricultural Commerce and Land Valuation, the father of two has worked in contract milking and farm management mainly around the Canterbury region.

For Alex Field of Otago Southland, this marks the second time he has made it to the Grand Final.

Three years ago, in 2019, Field competed in the Grand Final, winning the award for outstanding leadership skills.

Taranaki Manawatu farmer David Reesby was named a grand finalist towards the end of March.

Reesby is second in charge at his family’s dairy farm near Oroua.

The grand final event is scheduled to be held in Whangarei from the 7th to the 9th July.

A 27-year-old dairy farmer has been crowned the Waikato Bay of Plenty FMG Young Farmer of the Year.