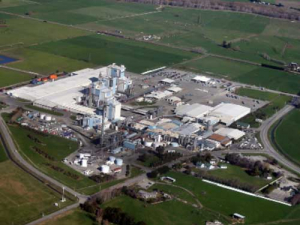 Butter is best when it’s made at Fonterra’s Clandeboye plant in the South Island.

That was the judges’ verdict at the recent New Zealand Champions of Cheese Awards, awarding the top butter prize to the cooperative’s NZMP Clandeboye unsalted butter. The unsalted butter picked up top marks from the international judging panel for its appearance and aroma, and was particularly commended for its good flavour.

Now in its 14th year, the NZ Champions of Cheese Awards are held annually by the NZ Specialist Cheese Association to honour excellence in cheese making. Butter and yoghurt categories have recently been added, acknowledging the importance of these dairy products for consumers.

Fonterra Process Manager Grant Rooney said he and his Clandeboye Cream team were delighted that their ‘everyday’ butter turned out to be something special.

“Our butter is standard, natural butter with no flavourings, no additives and no salt – the only ingredient is fresh cream. It’s just good, old-fashioned butter that’s great tasting and great quality.”

Rooney says the cream used in the champion butter is churned from grass-fed milk, which is flavoursome and nutritious.

“My team is very proud to have picked up this award but credit also belongs with our Fonterra farmers - top quality grass-fed milk makes top quality butter.”

Processing up to 12.4 million litres of milk per day, around 40% of the cooperative’s South Island milk, Clandeboye in South Canterbury is one of Fonterra’s largest manufacturing sites. The NZMP unsalted butter made at the site is used by food manufacturers around the world and is sold under the Mainland brand in New Zealand.

Butter has experienced a resurgence in popularity over recent years as consumers turn towards simple, all-natural butter as a spread and cooking ingredient. Butter consumption is growing strongly in many parts of the world, notably in China and the Middle East and African regions, which recorded compound annual growth rates between 2011 and 2016 of 13.2% and 14.5% respectively.

NZMP’s salted butter also picked up a bronze medal at the Awards.