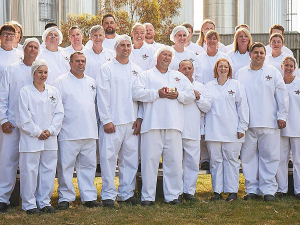 The co-op’s Western Star salted butter scooped the Champion Butter title for the 10th time at the Australian Grand Dairy Awards this month. It also picked up the Grand Dairy Champion award.

Western Star is manufactured at the co-op’s Cobden site in western Victoria.

The win coincides with the launch of a national television advertising campaign for Western Star.

Suri says there has been a lot of celebration at the Cobden site.

“It’s been a really great week for our people, not only is our hard work showcased on national television, it’s again been recognised as the best butter in Australia,” he says.

“Winning these awards are a testament to the consistency of the butter we produce – it’s the simple ingredients, the expert craft of our team, and of course, the quality of our south west farmers’ milk, which makes it so great,” says Suri.  Western Star is an iconic Aussie favourite, with judges describing it as a classic, pure, creamy butter with a rich satisfying, five-star taste.

Celebrating its 21st year, the Australian Grand Dairy Awards are the premier dairy awards within the Australian dairy industry. Organised by Dairy Australia, these awards recognise the ‘best of the best’ - each of the 400 products entered this year are already gold awards winners in State level competitions.

“Winning at The Australian Grand Dairy Awards is the highest accolade in the dairy industry and is testament to our farmers and producers, whose hard work and dedication to their craft inspires some of the highest quality dairy products in the world,” said Dairy Australia’s Alexandra Kury, convener of the awards.

Victorian producers claimed the highest number of Champion titles, taking out seven of the nineteen categories: Western Australia followed with four, New South Wales with three, South Australia and Queensland with two and Tasmania with one.