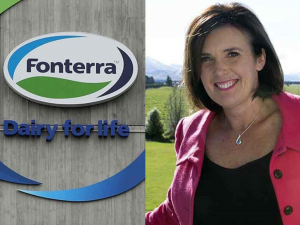 Leonie Guiney is among three directors who have been re-elected to Fonterra's board.

Three sitting Fonterra directors - chairman Peter McBride, Leonie Guiney and John Nicholls - have been re-elected to the board for another three-year term.

The three directors were the only candidates for board elections this year: however new election rules mean a candidate must get over 50% of the votes cast to be elected.

In Ward 10 (Northern Bay of Plenty) Don Hammond was re-elected.

In Ward 13 (Central Taranaki) Karyn Johnson and in Ward 19 (Tasman / Marlborough) Simon Tripe defeated their opponents to get elected to the council for the first time.

In the seven other Co-operative Council wards where elections were due, nominees were elected unopposed.