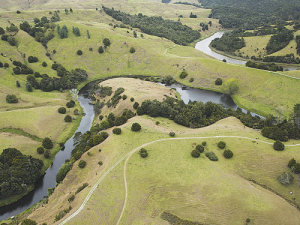 Fonterra is leading the industry in some areas of sustainability, says chief executive Miles Hurrell.

But there are areas where the cooperative has tried and hasn’t hit the mark yet.

The cooperative’s second annual Sustainability Report doesn’t shy away from that, he says. It covers how the cooperative is progressing towards its environmental, social and economic goals.

“We have considerable scale and with that comes the opportunity, and the responsibility, to influence for good. That’s exactly what we’re working to do: by producing dairy in a way that cares for people, animals and the land, and brings long-term value to our communities.”

The scale of the industry in New Zealand means that dairy’s environmental footprint is of national significance.

Fonterra’s director of sustainability Carolyn Mortland says farmers have led the way in excluding cows from waterways but other areas will take longer, like lowering greenhouse gas emissions onfarm and in manufacturing.

The Sustainability Report 2018 was prepared using the internationally recognised Global Reporting Initiative (GRI) Standards and has been independently assured.

The report is organised into the three pillars of Fonterra’s sustainability framework: nutrition, environment and community.

Fonterra launched a dedicated medical nutrition division tasked with pioneering dairy nutrition to help people recovering from disease and illness at all stages of life, and to help people age in good health.

71% of Fonterra’s everyday and advanced nutrition products meet Fonterra’s Food and Nutrition Guidelines, which were endorsed by the New Zealand Nutrition Foundation. This is working towards a target of 75% by 2020 and 100% by 2025.

A process that has previously taken hours can now be done in minutes: 92% of Fonterra’s products are electronically traceable, on the way to a target of 100% by 2020.

Fonterra farmers in NZ are among the world’s lowest in greenhouse gas emissions per litre of milk collected (0.87 per kg CO2-e/kg FPCM).

Fonterra farmers have fenced 99.6% of permanent waterways and installed bridges or culverts at 99.9% of regular crossings.

At Brightwater the site’s boiler has been converted to co-fire with wood biomass. The conversion cuts carbon emissions at the site by about 2400 tonnes a year – roughly the same as taking 530 cars off the road.

A recent water recycling innovation at Fonterra’s Paihiatua manufacturing site will save about 500,000 litres of water a day this season.

2018 marked the half-way point of Fonterra’s 10-year Living Water partnership with the Department of Conservation focusing on five freshwater catchments. Fonterra will help restore 50 more catchments as part of its water plan. Working with community groups, these catchments have been identified and action planning is underway.

Fonterra halved its gender pay gap in NZ from 4% to 2%, against a national average of 9.2%.

Fonterra Milk for Schools celebrated its fifth year and delivered its 100 millionth serving of milk for about 140,000 children each school day.

The KickStart Breakfast programme – run by Fonterra with Sanitarium and the NZ Government – grew to 976 breakfast clubs and served at least 125,000 breakfasts every school week.

696 community initiatives were supported through the Fonterra Grass Roots Fund in NZ, Australia and Sri Lanka.