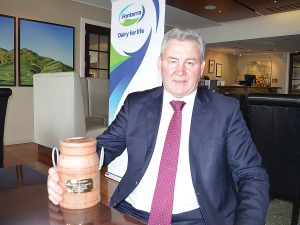 Monaghan, who stepped down as the co-operative chairman in 2020, was appointed Companion of the New Zealand Order of Merit (CNZM).

He was one of a handful of recipients associated with the agriculture sector.

Monaghan told Dairy News that he received an email a couple of weeks ago confirming his CNZM honour.

He couldn't tell family until Monday morning, the Queen's Birthday public holiday. The award coincided with another happy occasion - his youngest daughter's wedding over the long weekend.

Monaghan says the award was unexpected.

"I'm quite humbled by it: made me take out time to reflect. It was a call-out for the dairy industry and I'm proud to accept it on behalf of the industry."

Monaghan says the dairy industry keeps delivering for everyone.

"It starts on our farms, goes through our staff and plants and across the global markets and it keeps on delivering."

Monaghan, who now lives in Martinborough, still owns a farm in Eketahuna and farming interests in Otago.

He remains very proud of the co-op and these days keeps "a close eye on the co-op from the back paddocks".

"Fonterra is showing good results and good leadership," he says.

Monaghan has been associated with Fonterra since its formation in 2001.

He was an inaugural Fonterra Shareholders Council member and served as the council chairman from 2004 to 2007.

In 2008, he joined Fonterra as a director. He chaired the co-op board from 2018 to 2020, overseeing a reset of the co-operative's strategy and culture, and a global change management process.

He was a director of Wellington Centrepoint Limited. Within his community, Monaghan chaired Eketahuna School's Board of Trustees and is former club captain and junior-side coach of the Eketahuna Rugby Club.

Minister for Rural Communities Damien O'Connor extended his congratulations to the rural New Zealanders recognised for their service.

"I'm so pleased to see the recipient recognised for their contribution to rural communities, and to Aotearoa New Zealand more widely," O'Connor says.

"John Monaghan, appointed as a Companion of the New Zealand Order of Merit, has been influential in the dairy industry through his work with Fonterra since its formation in 2001, supporting the company to become one of New Zealand's top performing internationalcompanies."

Hocken, who has has a farming career of more than 50 years, was president of Taranaki Federated Farmers from 2006 to 2008.