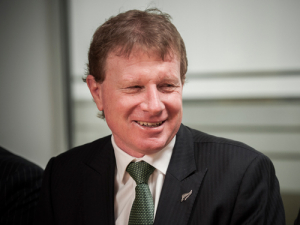 Former Fonterra chairman John Wilson passed away this morning after a hard-fought battle with illness, the co-op announced.

In July last year, Wilson stepped down as chairman; he retired at the co-op’s annual meeting in November.

In a note to Fonterra farmers today, Fonterra chairman John Monaghan said Wilson was a man whose dedication and commitment to the cooperative ran deep.

“We owe John and his family a debt of gratitude for all the time, energy and sheer hard graft he gave us as a farmer-owner, inaugural chairman of the Fonterra Shareholder’s Council on merger, as a farmer elected director from 2003, and as our chairman from 2012.

“John always brought dedication, commitment, and deep dairy knowledge to each of the representation and governance roles in which he served. On behalf of his fellow farmers he was the ultimate advocate for what we stand for.

“We have lost a friend, colleague, leader and champion for our industry much too soon. Our thoughts and deep gratitude for all that he contributed go to his family and friends,” said Monaghan.

Wilson is survived by his wife Belinda and four daughters, Sophie, Victoria and twins Tessa and Libby.