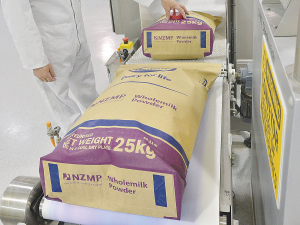 The 2.7% jump in last week’s Global Dairy Trade overall price index – with a 3.6% bounce in whole milk powder – was a surprise, economists agree.

All eyes will be on China demand and New Zealand spring production in the coming months.

Higgins told Dairy News these were pleasing – and surprising – results for this time of year, held up by robust Southeast Asia demand.

“We have seen extraordinary volumes shipped from New Zealand to China over recent months,” she says.

“NZ exports to China for the last three months have been at record levels.”

But it seems clear there is stock building in China, based on RaboResearch modelling.

“Based on the prolific Chinese import volumes in 2019 to date, we anticipate some price weakness to eventuate over the coming months as inventory pipelines recalibrate over the short term.”

“Global growth in milk supply is still expected to be relatively modest over the second half of this year,” she says.

“While much will depend on pasture conditions in NZ, it’s unlikely that last year’s exceptionally strong growth in milk production during spring will be repeated.

“And with the national herd likely to be static, or even contract a little, further growth in the national milk supply will hinge on incremental productivity improvements.

“This suggests that consumer demand for dairy products in China seems to be holding up well, despite growing headwinds for the Chinese economy and trade tensions.”

While last week’s GDT was a little stronger than they had pencilled in, Westpac is holding its $6.90/kgMS forecast for the current season.

ASB rural economist Nathan Penny says last week’s results were better than the bank’s expectation of no change and better than futures market pricing, which indicated a circa 1% rise.

“In our view, this result does not change the outlook for global dairy markets,” says Penny. “The result, if anything, is a function of prior price weakness rather than a signal of renewed price strength. With this in mind, we continue to see global dairy markets, as on the whole, tight.”

ASB is holding its forecast at $7/kgMS, but so early in the season that it comes with a wide range of error of $1/kgMS each way.