Good for business and the planet 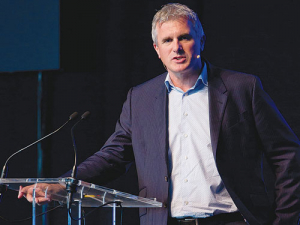 The company’s recent news of its sustainability and environmental strategy is not only good for the planet – it is good for business, he says.

Synlait plans to reduce its environmental impact significantly over the next decade in key areas of its value chain.

The sustainability emphasis is coming in particular from multinationals to whom they supply ingredients and customers who reach consumers with the finished product they manufacture for them.

“We see people concerned about the environment, animal welfare and people and community,” Penno says. “They want to work with companies who stand for the same things they stand for as people.

“With the internet, with people who have the world in their hands through their smartphones, they want to be associated with companies who believe the same things they do and hold the same things important as they do.”

Penno says Synlait has wanted to lead New Zealand dairying and its Lead with Pride programme has been a key positioning idea “not just as a face externally but in the way we go about our business”.

“We have always tried to make sure our farmers are holding to the highest standards in animal welfare, the way they work in the environment and how they work with their people.”

The new programme is moving that up a notch, taking account of climate change in onfarm, manufacturing and supply chain commitments.

“And we’re doing it in a way that calls for significant change not just in our [business] but across the industry.”

Key customer Danone has affirmed the move, saying it will deepen the relationship.

“They and we see it helping us commercially because ultimately there is a group of consumers out there who are happy to put their hands in their pockets and pull out a bigger note for a product that stands for what they stand for and a company that believes in the things that they do.”

Synlait wants a 35% reduction in greenhouse gases on its farms over the next 10 years.

It will not install another coal fired boiler; instead its advanced liquids plant will use an electrode boiler powered from the national grid.

The company will use technology and capital wherever possible to reduce its reliance on coal. With the likely cost of carbon in the future and NZ’s electricity cost changes over time, these will be sound economic decisions, says Penno.

“This programme is future focussed, based on what our consumers will want and what we will be financially rewarded for through those supply chains; but pragmatically we have made sure the capital we need to commit over the next decade will be rewarded.”

“This gives our people the opportunity learn from new technology.... As the standard continues to change we can remain right at the innovative end of the production systems used to produce food for the world’s leading consumers.

“These are not things we just dreamed up and set ambitious targets for without doing the work to ensure they are sound business decisions as well as being good for the planet.”