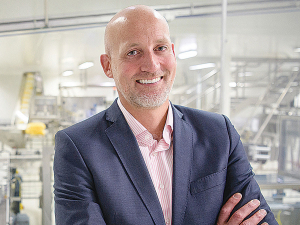 Canterbury milk processor Synlait reports “a solid result” in its half-year profit announcement, albeit down 9.6% on the same period last year.

“This remains a solid result for the first half of the year, with increased sales volumes in our powders and cream and lactoferrin businesses,” Synlait told the NZX.

“The higher sales volumes were due to our ability to increase production volumes off the same asset base, a very pleasing result and representative of the efficiencies we are developing in manufacturing through our integrated work systems programme.

“While our sales volumes of fully finished infant formula were slightly ahead of HY18, these were delivered at lower margins. This is a result of the new pricing agreement entered into with The a2 Milk Company last July, as well as not having the benefit of the higher-margin sales to our China customers that we enjoyed in HY18. These brands are awaiting state administration for market regulation (SAMR) registration.”

Chief executive Leon Clement said strong growth is expected for the second half of the year.

“We remain on track for our full year canned infant formula volume guidance at between 41,000 – 45,000t, with significantly higher volumes forecast to be delivered in the second half of FY19 compared to the second half of FY18, which saw only an 11% uplift on the first half,” said Clement.

“The volume growth in the second half of FY19 is driven by strong growth in The a2 Milk Company’s Platinum brand of infant formula. We maintain our outlook that full year profitability is expected to increase in FY19, but not at the same rate as FY18.”

The company said the first half-year was characterised by significant investments into its manufacturing base across all key categories.

“The build of our new infant-capable manufacturing facility in Pokeno continues to be on track for commissioning for the 2019-2020 milk season. This is a $280m investment which will allow us to meet customer demand, whilst also eliminating our single-site risk.

“At the same time, we are recruiting new milk suppliers in the area. We remain on track for the start of the 2019-20 milk season and are encouraged by the warm welcome we’ve received from Waikato dairy farmers.”

A key focus was meeting its commitments to Foodstuffs South Island (New World, Pak’n’Save, Four Square) to provide private-label fresh milk and cream through its new advanced liquid dairy packaging facility in Dunsandel. That remained on track to deliver the first fresh white milk in April.

Clement said the $18m expansion of the Dunsandel lactoferrin facility had been completed, doubling the production capacity for the high-value protein, which is recognised for its anti-bacterial and anti-inflammatory properties and in demand for infant formula.