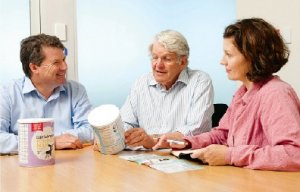 A NEW infant formula, made from New Zealand milk, has been launched in China.

Launched last week at the Shanghai Children and Baby Maternity Products Expo, the product highlights New Zealand’s food safety laws and clean, green reputation.  It is being marketed as formula made from fresh New Zealand milk.

“However, the fact we’re selling formula made from fresh New Zealand milk to our children as well as those in the rest of the world, shows the confidence we have in our product.

“We are pleased to have a New Zealand product which is safe, nutritious and truthfully labeled.  Following a thorough testing process, Carrickmore Infant Formula has met New Zealand and Chinese regulatory requirements.”

Milk for the infant formula is supplied by Fonterra and is packaged in Auckland.  Strict quality control enables Carrickmore to guarantee the safety and integrity of our Carrickmore Infant Formula, says Claridge.

Co-founder and former consultant obstetrician Richard Claridge says it is a world-class baby formula developed with a focus on nutrition and child development.

For us this is part of a long commitment, he says. “We have [done] research, developed a memorandum of understanding with the University of Canterbury to research maternal and neonatal nutrition and we have developed a range of complementary products including a cod liver, flax and DHA and ARA oil capsule range .”

Carrickmore executives attended the China launch. Gentech Food, based in Guangzhou and Shanghai, has been appointed master distributor for China.  Gentech distributes infant products to 600 Mother and Baby stores throughout China.

In New Zealand, Trents Wholesale Ltd, a subsidiary of Foodstuffs South Island Ltd has been chosen as the distributor, says Claridge.